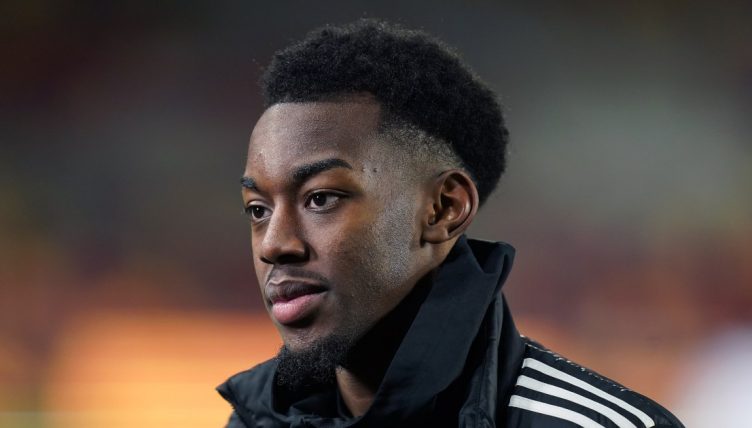 Manchester United’s Anthony Elanga stared down the Leeds United fans and pointed to the Manchester United badge after the final whistle in his side’s 4-2 win in the Premier League’s Sunday afternoon kick-off.

Elanga came on in the 67th minute for Jesse Lingard and soon found himself at the centre of controversy when an object from the crowd appeared to hit him as he celebrated with his team-mates when Fred put Manchester United 3-2 up.

The Swede, a product of Manchester United’s academy, had the last laugh however when he scored the final goal of the game to wrap up United’s victory in the 88th minute.

Played in by Bruno Fernandes, Elanga calmly slotted the ball under Illan Meslier for his second goal of the season.

At the full-time whistle, Elanga stood in front of the Leeds fans near where he appeared to have been hit.

He stared coldly at the Leeds fans and, after he embraced fellow goalscorer Fred, he pointed at the United badge and to the floor.

The match was played in brutal conditions, the pitch battered in the wake of Storm Eunice.

It created a wet and muddy foundation for the match, which lent itself to the brutal nature of the heated rivalry with both teams unafraid of putting in hard challenges.

Despite having gone 2-0 up in the first half, Manchester United threw away their lead in the space of a few minutes in the second when Rodrigo’s cross flew over David de Gea and into the net before substitute Raphina completed the comeback.

But both of Ralf Rangnick’s substitutes netted for the Red Devils to ensure his team took all three points back with them across the Pennines.

Elanga has featured heavily under Rangnick who was impressed by the youngster’s application in training sessions and through videos.

“l had heard his name before and I was in my hotel room watching videos of him on YouTube,” Rangnick said, when asked why he had used Elanga so much.

“I thought this boy was really good. He was almost on his way out on loan. I told him, ‘You will not go out on loan, you will stay here.’ He has developed in training.”

Watch: Man Utd’s McTominay lucky to escape a sending off against Leeds