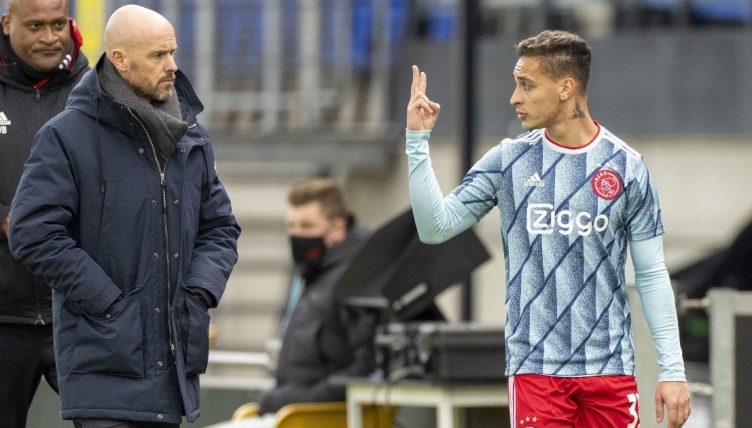 Manchester United are in internal discussions over the transfer of Ajax winger Antony, Fabrizio Romano has confirmed.

The transfer journalist also said that Antony’s agents are pushing strongly for a deal, and encouraging Ajax to listen to Manchester United’s proposals for the Brazillian winger.

“Many Manchester United fans keep asking me about Antony on what’s going on,” Romano said.

“There is still no official bid from Manchester United because they know that submitting a proposal for €40million makes no sense.

“Ajax want €80million, then maybe they can negotiate on the structure of the deal, on the add-ons. But for €40millionn, Manchester United know it makes no sense make a proposal.”

Romano confirmed there was interest from the Manchester United side in finding a deal for the Brazilian winger. The 22-year-old impressed under Erik ten Hag at Ajax.

However, Ajax are in a strong position financially due to other sales. They feel they have no need to listen to United proposals that don’t meet their asking price.

“So, they [United] are discussing, they are considering the possibility; Erik Ten Hag is a big fan.

“But at the moment what I’m told is Ajax want this big fee, and also the Ajax manager [Alfred] Schreuder said that they have the idea of keeping the player at the club.”

But Romano also confirmed that from the player’s side, Antony’s agents were pressuring Ajax to be more open to offers.

“I’m told that the agents of Antony are pushing with Ajaxm because they want Ajax to listen to the proposals,” he said.

“They want Ajax to have some conversations with Manchester United and potentially other clubs.

“For Manchester United, Antony is a target and his agents are pushing Ajax with he club to understand if they can negotiate.

“So not just Frenkie de Jong, also Antony is one to watch for Erik ten Hag and his Manchester United project.”