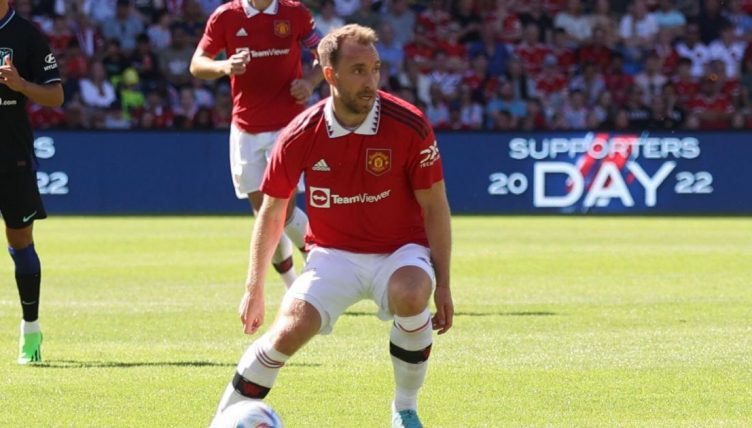 Manchester United may have lost their pre-season friendly against Atletico Madrid on Saturday, but a ridiculously good pass from new signing Christian Eriksen had fans salivating.

Eriksen joined the Red Devils on a free on July 15 following an excellent half-season spell with Brentford in 2021-22.

During those preparations, he was interviewed for the official Manchester United website and, asked why he chose to join the club, said: “First of all, the football.

“I mean, I’m a guy who wants to play football and I think with the idea of the manager coming in and the ideas he had and also with my conversations with him, I mean I could see myself playing football in Manchester…

“Obviously to speak with the manager and hear his ideas and have conversations with him on the football terms was great and ideal for me to get the decision and the possibility of coming to Manchester United.”

Eriksen came through the academy at Ajax, the club Ten Hag managed before he moved to Old Trafford earlier this year, so will understand the philosophy on which the Dutchman’s teams are built.

The 30-year-old will also bring a great deal of technical quality and creativity to the United midfield, adding to that already provided by Bruno Fernandes.

Eriksen made his first pre-season appearance in a United shirt in the club’s penultimate pre-season preparation game on Saturday and, despite only playing 21 minutes in a 1-0 loss in which Fred was shown a red card for a stupid stamp, the Dane was able to show his class.

He created one extremely presentable chance for Harry Maguire, whipping a corner kick onto the England defender’s head only to see Maguire’s effort sail past the post from six yards out.

Just before that, though, he played an even more impressive ball. Drifting over to the left, he picked up possession and sent a wicked cross full of deceit and backspin flashing across the box.

Neither Anthony Elanga nor Marcus Rashford were able to connect with it, but if Eriksen can play that sort of pass with any regularity this season, he will doubtless add to his impressive Premier League assist tally.