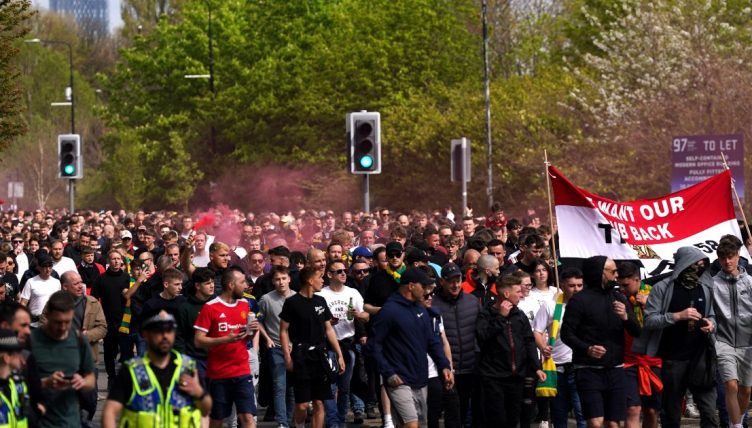 Thousands of Manchester United fans have marched upon Old Trafford ahead of the Premier League match against Norwich in protest of the Glazer Family’s ownership of the club.

It’s the latest in a series of protests of varying sizes in the saga of the Glazer ownership of the club, the biggest of which occurred last year when United fans caused the postponement of their club’s match against Liverpool by breaking onto the Old Trafford pitch.

On that occasion, a group also prevented the United players from leaving the Lowry hotel, where the team stay ahead of home matches.

United fans have grown frustrated with their team’s performance both on and off the pitch, with the finger being pointed at Glazer ownership for the club’s troubles.

The protesters also plan to boycott the first 17 minutes of the match, one minute for each year of Glazer ownership.

It was organised by a fan group called ‘The 1958’ in reference to the Munich Air Disaster, a tragedy that killed most of United’s playing squad.

“The announcements from the club this week have confirmed one thing, they are worried,” the group said in a public message.

“We have the passion and relentless energy to make this the biggest football ownership campaign in history, and it will be successful.”

Earlier in the week, the group organised a small protest outside United’s Carrington training ground which went peacefully.

When asked about it, Ralf Ragnick told the media that he respected fans’ right to have their voice heard.

“We all know football is a game of passion and emotions,” he said.

“I can understand our supporters are disappointed with our standing in the table and the performance we showed at Everton, at least after we conceded that first goal.

“But I still believe our supporters are one of the best, if not the best, in England and as long as they protest in a peaceful way and support the team in the stadium, they have a right to express their opinion.”

Manchester United supporters #protest against the Glazers. Fans march to Old Trafford to boycott the first 17 minutes of the game which signifies a minute for each year the Glazers have owned the club. #GlazersOut #Manchester, UK April 16, 2022 @The__1958 @ManUtdMEN pic.twitter.com/gVSBNAsbmO