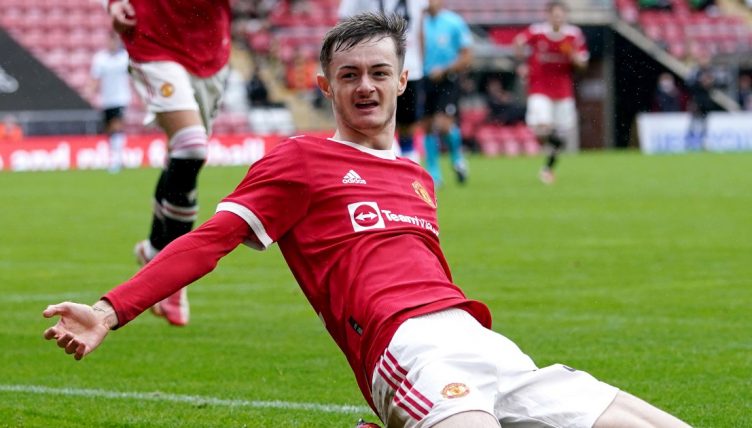 Manchester United youth player Joe Hugill produced a stunning back-heel flick before tapping in an Ethan Ennis cross in the Under-18 match against Middlesbrough on Saturday lunchtime.

Hugill’s goal levelled the match at 1-1 and was his 22nd of the season.

It was a beautiful goal that saw Hugill and Ennis combined to score. Hugill received the ball just outside the Middlesborough box and produced a stunning flick with his first touch.

He had spotted his strike partner Ennis running down the left side of the box and backheel flicked the ball as he turned, sending it perfectly into Ennis’ path.

The Middlesborough goalkeeper came out to meet Ennis but the youngster was able to knock it past him and across the face of goal where Hugill had continued his run to poke home despite being flanked by two defenders.

Hugill will be used to playing in the Northeast, having been born and raised there. He previously played for Sunderland’s academy before he was poached by United in the summer of 2020.

Ennis has also impressed this campaign and has netted six times in 14 matches across various age groups. He is just 17 and joined from Liverpool’s academy only last year.

Both have been part of the youth team that has reached the final of the FA Youth Cup, United’s first in over ten years.

“I’ve seen them play, not in the semi-final, but in the quarter-final against Leicester and I also watched the game against Borussia Dortmund in the UEFA Youth League,” Manchester United manager Ralf Ragnick has said of the impressive youth side.

“There are quite a few technical players, really good players in possession of the ball, and, if they can combine that with physicality, with speed that is also necessary for the Premier League, I would be very happy to see a couple of those players in the first team in the next years.”