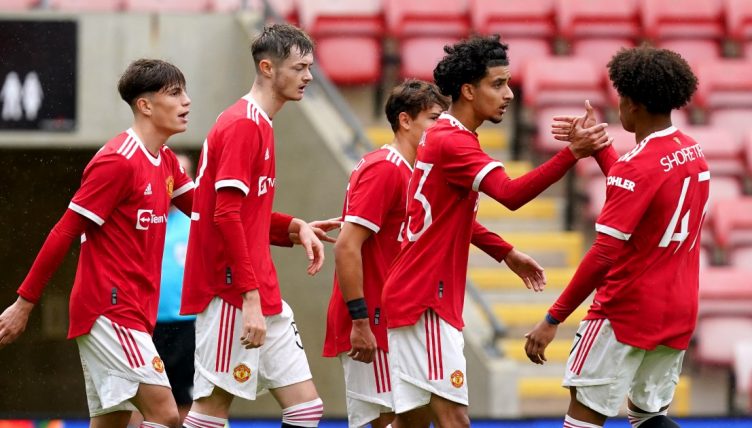 Manchester United’s Under-23 team romped to a 5-2 victory over Derby County in their Premier League 2 game on Friday night – and the pick of the United goals was a scintillating team move finished emphatically by Noam Emeran.

United went into the game looking to move up into fourth place in the Premier League 2 standings. They did so emphatically, with four second-half goals eventually handing them a comfortable win.

The United youngsters – and they are young, the team on Friday night had an average age of just 19.3 years – scored after 24 minutes through attacking left-back Alvaro Fernandez.

That goal gave them a lead at the break, but visitors Derby came back into the game at Leigh Sports Village, Osazze Aghatise levelling 10 minutes after the break.

From there, however, United took control. Hannibal Mejbri made it 2-1 from the spot, before quickfire goals from winger Noam Emeran and Charlie Savage – United academy centre-back and son of former midfielder Robbie – put the game beyond Derby’s reach.

Shola Shoretire made it five with three minutes of normal time remaining before Bartosz Cybulski grabbed an injury-time consolation for the Rams.

The pick of the goals was doubtless Emeran’s effort, however. His emphatic finish came after a stunning team move that United’s senior team would struggle to emulate.

Alvaro Fernandez again got forwards down the left flank, cleverly pulling it back to 19-year-old French youth international Emeran, who signed for United from Amiens in 2019.

Emeran then applied an unerring finish, thumping a left-footed shot into the top corner from 13 yards out.

But it was the build-up that was most impressive, United completing 21 passes before the ball hit the net.

A crossfield ball from Savage in the middle of the move caught the eye, but the slick two-touch play and clever movement throughout would have pleased Under-23 coach Neil Wood no end.

This is more promising stuff in a great week for United’s young players.