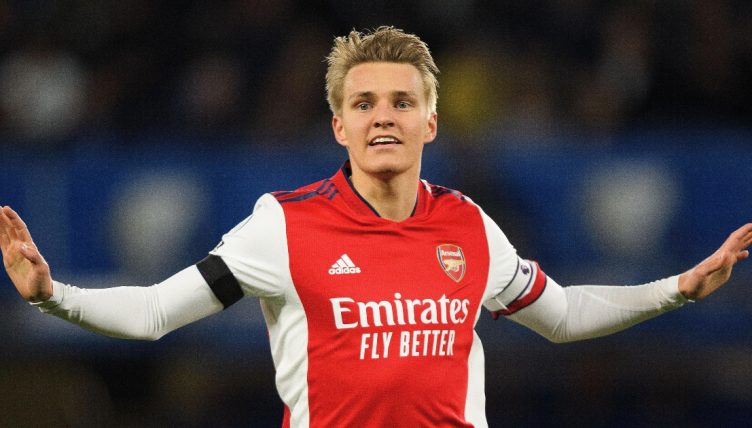 Martin Odegaard has been one of Arsenal’s best players this season – and the Norwegian illustrated his class with a filthy first touch during the Gunners’ Premier League match against Leeds United.

Odegaard has helped to fill the creative void left by Mesut Ozil at the Emirates Stadium, regularly wowing the Arsenal fans with moments of class.

The 23-year-old, who captains the Norway national team, has not only flourished on the pitch but has been praised by Mikel Arteta for his leadership skills and has been given the Arsenal armband this year.

“He is the future of this club,” Granit Xhaka told TV2 this week. “He’s already captain when Alexandre Lacazette does not play. He can be very proud of himself.

“He can definitely become Arsenal captain. He has the DNA in him. He works as hard every day as if he were in a fight. He does a lot of extra work. He is humble. Everyone in the dressing room listens to him. Why not?”

And the Norway international demonstrated his ability during the first half of Sunday’s match against Leeds.

Arsenal were already 2-0 up thanks to an Eddie Nketiah brace when Cedric Soares released team-mate Bukayo Saka with a lofted pass.

The ball found its way to Odegaard who took Diego Llorente out of the game with a silky chip over the defender’s leg.

Never mind that the cut-back which followed didn’t quite find a team-mate; the 23-year-old midfielder had illuminated the match and shown why he has become such a fan’s favourite at Arsenal.

That touch from odegaard 🤢 pic.twitter.com/7ZFPn4Hfig