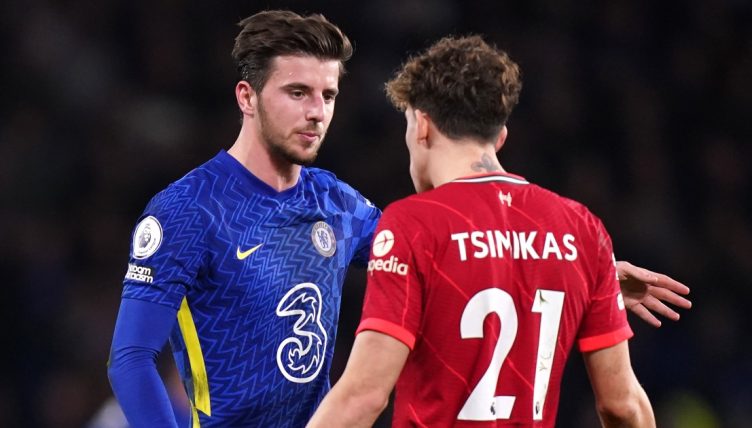 The first-half of Sunday’s match between Chelsea and Liverpool has been a highly entertaining slugfest with two goals apiece – but Mason Mount, like Sadio Mane earlier in the match, was lucky to remain on the field for its duration.

Both teams entered the game at Stamford Bridge knowing that a win was imperative to keep runaway leaders Manchester City in their sights.

And, consequently, proceedings started at the speed of a runaway Formula One car and rarely slowed down. Liverpool scored twice within the first 25 minutes, through well-taken goals from Mane and Mohamed Salah.

It was around the half-hour mark where Mount found himself in a spot of bother. Getting himself embroiled in an off-the-ball incident with Kostas Tsimikas, the England international was blocked off by Tsimikas, then lashed out on him when he got up.

Mount intentionally kicked his opponent in frustration, without much aggression, but will feel lucky to have only received a yellow card.

VAR did its best to raise the blood pressure of Chelsea supporters by checking the incident for several minutes but did not deem Mount’s offence to be worthy of dismissal.

Quite the weekend for Prem officiating.

Mason Mount kicking out at Tsimikas while he’s down. No card or even a talking to from the ref.. #CHELIV pic.twitter.com/aF5mT8iHtZ