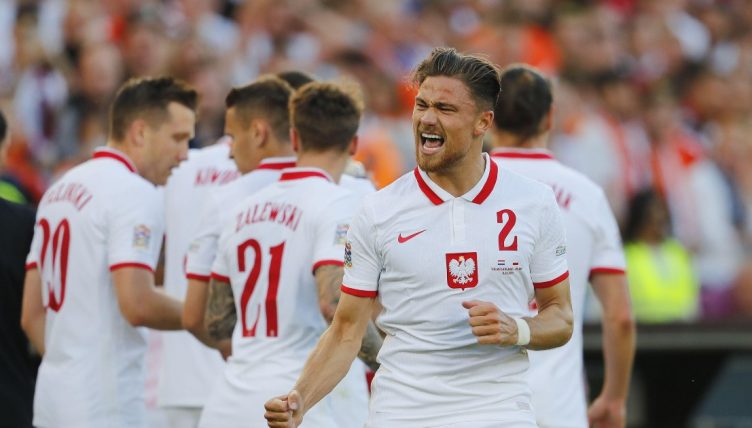 Aston Villa right-back Matty Cash scored a stunning strike for the Polish national team against the Netherlands in their Nations League match, his first goal in international football.

Isolated on the right of the pitch, Cash received the ball and drifted towards the Dutch box. As he got closer and space opened up, he opted to shoot, firing a powerful, low ball along the ground and into the far corner.

He was then mobbed by his teammates, all of whom seemed delighted for the England-born Polish international.

Since then he has become the starting right-back for Poland and has helped them qualify for the 2022 World Cup in Qatar.

“We lost my grandad six years ago – he’d definitely have been very proud to see me represent Poland,” the Villa right-back said after switching nationalities.

“This has been a very proud moment all around my family, especially on my mother’s side.

“I’ve got relations in Poland but I’ve never been there and never met them, but my mum has been on the phone to them constantly and everyone is so excited.

“Even the response I’ve had from people on social media has been unbelievable. I can’t wait to get going and meet everyone. I only speak a few words of Polish but my mum speaks it fluently and she has been helping me brush up.”

Cash also revealed that he could have become a Polish international much earlier.

“The last president [of the Polish FA] I believe didn’t really want to listen to me,” he said.

“Not in a rude way, he just wasn’t into the idea of me coming to play for Poland. But the new president came and he has been really helpful and wanted to get it done quickly, as did the manager. That all helped push it on.

“A few days before I went to the Polish embassy to pick it up the manager rang me and said it would be great for us to have a sit-down.

“So we did and it was really positive, a great chat. About the way we’re going to play and he went through loads of things about tactics, formations, what training will be like.”

Can you name Aston Villa’s XI from their 1996 League Cup final victory?