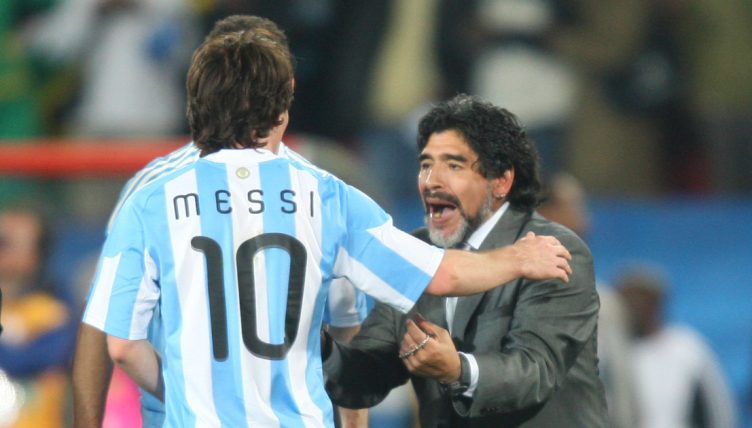 Diego Maradona and Lionel Messi are the two Kings of Argentina and two of the greatest players to ever kick a ball, but coming from two different eras meant the world never got to see the two play together on an actual football pitch.

However, the closest we got to seeing the two magicians battle it out was when Messi was just a teenager and played in a tennis football match with Maradona, as well as Argentina teammate Carlos Tevez and retired Uruguay legend Enzo Francescoli.

The active players Messi and Tevez were teamed up against the retired Maradona and Enzo in what became a dramatic affair and even had VAR before VAR existed, as Maradona saw a point ruled out after a heated dispute with Tevez.

It was an event that attracted a raucous crowd as Messi and Tevez were both two of Argentina’s biggest rising stars facing two retired heroes, but it was not the only time they played together.

Messi, Tevez and Maradona have had a few matches in the past, with the fourth member of the quartet constantly changing, and Enzo Francescoli proved to be a useful teammate for Maradona despite his allegiance to River Plate, who are Boca Juniors’ biggest rivals.

The Uruguayan was also an incredibly technical attacking midfielder, and the four players all wore the iconic No.10 in their careers.

The retired pair were a tough opponent even for Messi, and the greatest players never lose their magic touch. Maradona, despite being by far the oldest and least fit player on the pitch, was still leaving the crowd in awe at his technique which kept his side competitive in the tie.

Messi and Tevez eventually won the game by 10 points to six as their match sharpness gave them the edge, but all four players put in a spectacular show of skill and they embraced in good spirits at full time.

There is often debate about who was the better player between Messi and Maradona to claim the title as the greatest of all time, but even Messi himself stated that Maradona wins the battle.

”Even if I played for a million years, I’d never come close to Maradona,” Messi claimed.

“Not that I’d want to anyway. He’s the greatest there’s ever been.”

The full video of the match is below, and it’s as extraordinary as you’d imagine with some of the best characters and players ever together for a few glorious minutes.