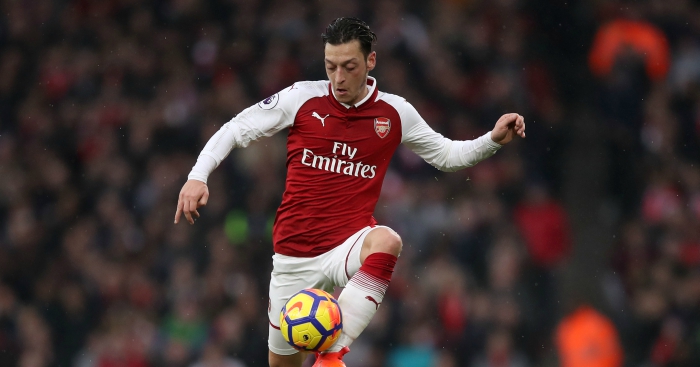 Arsenal defeated Tottenham in Saturday lunchtime’s north London derby, in no small part thanks to an absolute masterclass by Mesut Ozil.

Ozil deservedly claimed the Man of the Match award as he created four chances and claimed his 200th club career assist for Shkodran Mustafi’s opener in the 2-0 victory.

Afterwards, however, he was just as keen to share the praise with his team-mates.

“On the pitch I just think about the team, and myself to give everything on the pitch,” he told Sky Sports.

“I really enjoy it. We have good quality. Lacazette and Alexis are always dangerous, and today Alexis especially showed his quality. I am really happy for him to score against Tottenham.

Ozil’s assist took him to 45 in the Premier League, more than any other player has recorded since he made the move to England at the end of August 2013.

“As I was going up for the free kick I said to him ‘Mes, please, go to the ball and get it in’,” Mustafi said of his latest.

“If you have players who can put the ball in like that, you go in with belief, and that’s the most important thing when you go up for corners or free kicks.”

Ozil recorded 52 touches before being replaced by Alex Iwobi in the 84th minute, completing 26 passes and winning two tackles.

The performance came just days after he starred for Germany in their 2-2 friendly draw with France, creating the home side’s first goal with a perfect through ball.

Ozil's eye of the needle assist for Werner to equalise#GERFRA #afc pic.twitter.com/rvmdZpLl1X

Somewhat incredibly – in hindsight – the brilliance of Ozil was overlooked before the game, as journalists chose their ‘combined XI’ from the two north London giants.

Not a single so-called expert selected the 29-year-old in their teams, but such is his character that he would respond with such a sublime performance.

His 45th Premier League assist for Arsenal adds to the 24 goals he has netted for Arsene Wenger’s men, who have lost just 24 of the 126 games he has been involved in since he joined the club.

For club and country, Ozil has played a direct role in five goals in his last six appearances, and averages 3.4 chances created per game in the Premier League this season.

And if we’re honest, we all enjoy watching Ozil at his best, sometimes a little too much…

True love is a Mesut Ozil pass. Well-timed, gentle, makes things easier and will find you wherever you are, as long as you're ready to receive it.