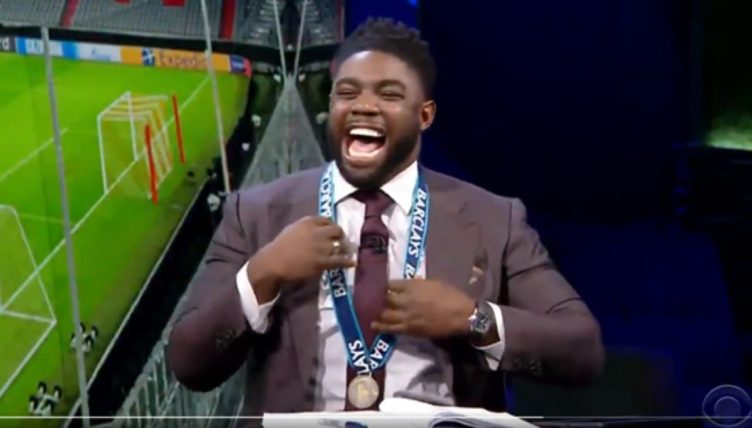 Micah Richards’ reaction to Manchester City’s opening goal against Real Madrid was so ridiculous and hilarious that it required an action replay – and full MNF-style analysis from Jamie Carragher.

The opener was so early that it rudely interrupted Richards as he was tucking into his dinner, Shay Given style. However, while Given was famously nonplussed while eating his meal, his former City team-mate gave De Bruyne’s goal his all when he celebrated.

The famously vivacious pundit, who made over 200 appearances as a right-back for City after coming through their academy, celebrated wildly after the Belgian struck past Thibaut Courtois.

Incredibly he managed not to lose the bit of pasta that was in his mouth as he shouted at the top of his lungs, sitting in the studio for American broadcaster CBS Sports alongside his fellow Sky Sports regular Jamie Carragher and Arsenal legend Thierry Henry.

Carragher went back to the footage and slowed it down to show Richards masterfully controlling the bit of pasta at the edge of his lips as he celebrated before masterfully got it back into his mouth with the finesse of Johan Cruyff with the ball at his feet.

“Listen, this has to be analysed. When we talk about some of the technicians we had on the show today: [Toni] Kroos, [Luka] Modric, [Kevin] De Bruyne, [Bernardo] Silva… no one produced a better first-touch and control of a situation than Micah Richards with the pasta,” Carragher quipped.

“Look at this here… He thinks he’s lost it, miscontrolled it… but then look at this!

“Forget Luka Modric, we’ve got Micah! Big Meeks is back!”

The save of the night came from @MicahRichards. @Carra23 couldn't believe his reaction to KDB's opener. 🍽 😂 pic.twitter.com/2HCfA3R4fr