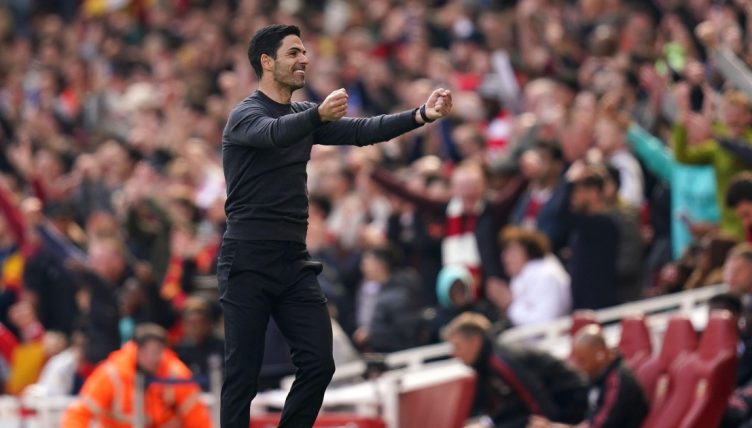 Arsenal were impressive in their 3-1 victory over Manchester United at the Emirates, but the result could have been very different as Bruno Fernandes missed a penalty for the visitors.

Arsenal found themselves 2-0 up through Nuno Tavares and Bukayo Saka, but Cristiano Ronaldo pulled one back for United, and had a chance to equalise in the second half after Tavares was penalised for handball.

Surprisingly, Bruno Fernandes stepped up to take the penalty instead of Ronaldo, and after taking a slow runup, saw his spot-kick hit the post and go wide, and Arsenal were jubilant.

The players on the pitch celebrated as much as the fans in the stands, and manager Mikel Arteta’s reaction to the miss highlighted how crucial a moment it was.

The Spanish coach was buzzing on the touchline, and pumped the crowd up after the miss, celebrating with the same passion that he shows when Arsenal score themselves.

Granit Xhaka then went on to score a long-range effort to seal the victory, and a vital three points in the race for a top-four spot.

Arsenal now sit in fourth, two points ahead of rivals Tottenham and six ahead of United, and Arteta was clearly pleased with the win.

“I think it was a phenomenal game for the spectators and the fans. For us it was a bit of a rollercoaster,” Arteta stated after the game.

“We wanted to start the game really quick, really fast. Dominating them, creating issues, very vertical, and we managed to do that.

“When they missed their penalty, and we made the change in shape and scored the goal, I think that’s where we won it.

“Today was decisive when you have total control of the match and you are 2-0 up, Ronaldo comes in out of a nothing and is with Gabi and manages to score a goal. Then Bruno Fernandes missed their goal, and then Granit scores.”

Arsenal are now back on track for a coveted fourth spot in the Champions League, a competition which they have not qualified for since 2016, and Arteta has seen his popularity with the Arsenal fans shoot up this season.