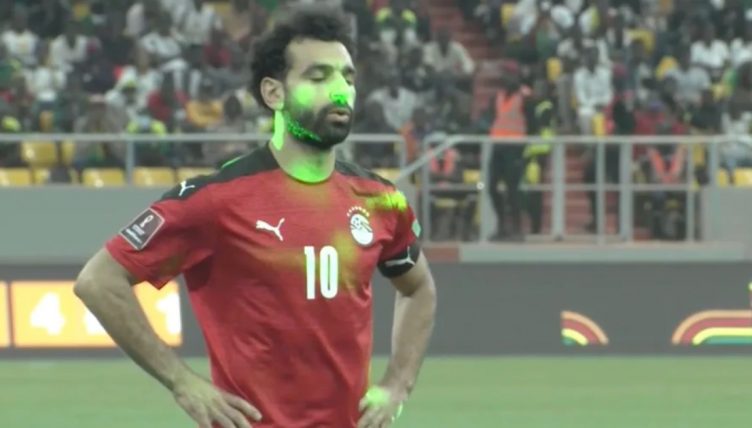 Liverpool talisman Mohamed Salah missed a costly penalty as Egypt lost via a shootout to Senegal in their 2022 World Cup qualifier – and he may feel aggrieved after being distracted by laser pens from the crowd.

Just like last month’s Africa Cup Of Nations final, it was Salah’s Liverpool team-mate Sadio Mane that stepped up to score the decisive spot-kick. Senegal will be at Qatar later this year at Egypt’s expense.

The African champions came into their home second leg looking to overturn a 1-0 deficit after losing away in Egypt last week – with a strike from Salah to help force own goal.

Just as Egypt did in the first leg, Senegal scored in the opening couple of minutes – with an own goal from Egypt midfielder Hamdi Fathi.

There were no more goals for the rest of the night, with everything all square at 1-1 after extra time to force a repeat of the penalty shootout in the African Cup of Nations final.

Salah appeared set to take Egypt’s fifth penalty on that occasion, but Senegal settled it before he had a chance to step up. He wasn’t going to make that mistake again – he took responsibility to take the Pharaohs’ first spot-kick.

Liverpool’s Egyptian King skied his penalty over the bar – after being faced with a barrage of green lasers in his eyes.

The first four penalties were all missed – two apiece – but the hosts recovered to hold their nerve, as Mane ultimately proved to be Senegal’s hero once again.

I mean, just look at this. Salah sails his penalty over… and surely anybody would, given the lasers.

Mane scores, Senegal wins the shootout, Egypt out of the World Cup pic.twitter.com/tgHmCmW8uu