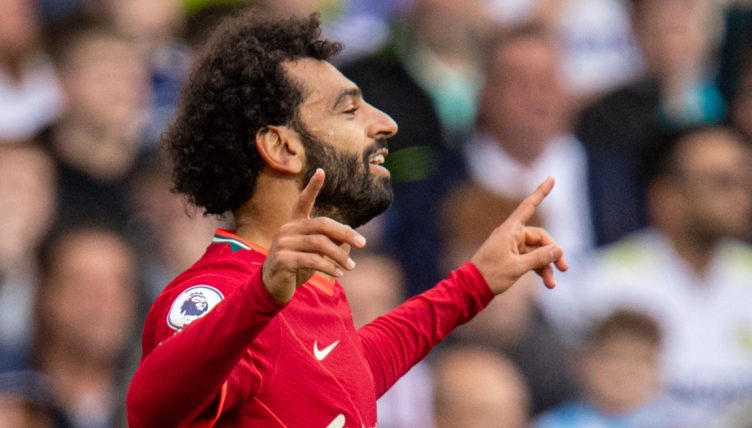 Liverpool forward Mohamed Salah has admitted that he set himself a target of scoring 40 goals and registering 15 assists at the start of the 2021-22 season.

Salah has enjoyed a scintillating campaign for Jurgen Klopp’s side, who are still vying for an unprecedented quadruple with six games of their season remaining.

It’s unlikely that the 29-year-old will reach the 40-mark for goals, but he’s still fired in 30 across all competitions for the Reds since opening his account for the term at Norwich City in August.

The Egypt international hasn’t been as prolific in front of goal since returning from his Africa Cup of Nations final heartbreak early in 2022.

But Salah is still finding the net regularly and is also setting up team-mates. He assisted Fabinho in Liverpool’s 3-2 Champions League semi-final win over Villarreal and has now reached 15 assists in 2021-22.

Speaking to BT Sport after Klopp’s men secured progression into the Champions League final, Salah said: “Always at the start of the season, I set targets. I know what I want as an individual and collectively. That way I know how my season is going.

“Yeah. I have big expectations for myself. Honestly, I’ve never said this but before the season started, I go for 40 goals this season and 15 assists.

“I need to focus on the goals now! Trent [Alexander-Arnold] is going to be angry that I have the highest assist in the Premier League, but I’m going to go for everything.”

The brilliance of the recently named Football Writers’ Association’s Footballer of the Year will be needed in the final weeks of what could become the greatest club season of all-time.

Mo Salah is not too far off the target he set for himself at the start of the season 👀#UCL pic.twitter.com/md3An8ygSa