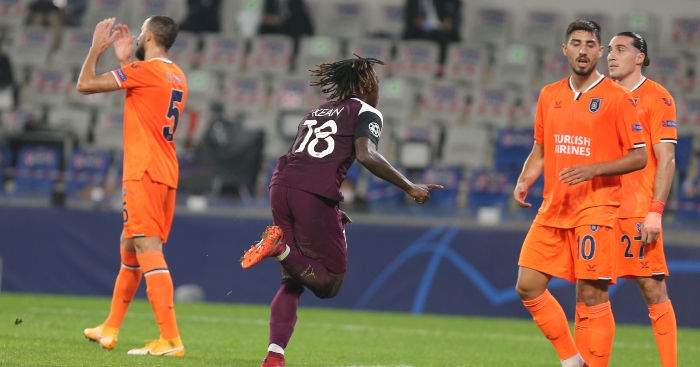 PSG had an embarrassment of riches in attack as they lined up for their Champions League match against Istanbul Basaksehir.

Neymar, Kylian Mbappe and Angel Di Maria were all on show, but it was Moise Kean, the 20-year-old loanee from Everton who couldn’t get into the Toffees’ team, who stole the limelight.

Kean scored both of the Parisiens’ goals, offering an indication of just how lethal he can be following a disappointing 2019-20 campaign at Everton.

Having bagged his first two PSG goals against Dijon over the weekend, he opened the scoring with a quality header, ghosting away from his marker and diverting the ball towards the top corner.

It was a fairly understated goal, but it shouldn’t be underappreciated, as the movement was intelligent and his finish gave the goalkeeper Fehmi Mert Gunok absolutely no chance.

Then there is the second, where the Italian was able to show some real star quality with the touch and finish he provided.

Moise Kean scores his 2nd for PSG tonight. On for a hat-trick pic.twitter.com/rbScC81pIM

He didn’t manage to bag his hat-trick, but regardless, this will feel like a massive signal of intent for the youngster, who will look to put his underwhelming spell at Goodison Park behind him.

Considering he’s just upstaged both Neymar and Mbappe in a Champions League match to earn all three points, it’s safe to say he’s got off to a good start.