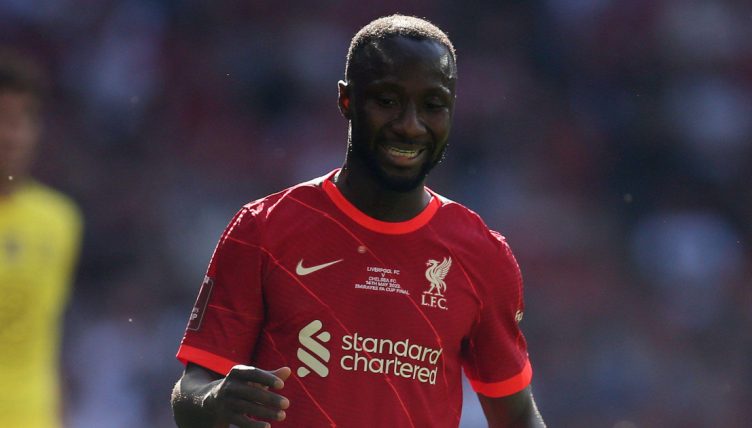 Liverpool were in good spirits in their final training session ahead of their Champions League final against Real Madrid.

Jurgen Klopp’s squad took it in turns to attempt a crossbar challenge and midfielder Naby Keita almost pulled off an outrageous skill when he took his shot.

Keita watched captain Jordan Henderson successfully clip the crossbar with his effort and managed to match him by sending a chipped shot onto the top of the bar, drawing cheers from his Liverpool team-mates.

The rest of the squad then watched on eagerly as the ball came down from the air, hoping it would land perfectly onto the crossbar again while Keita sprinted forward, but it missed by mere millimetres.

Everyone was in a jovial mood despite the prospect of facing 13-time European Champions Real Madrid in the final and flashbacks to the loss in 2018 were a million miles away as they cheered on Keita’s attempt.

Klopp recently spoke about the importance of Keita in his midfield, who has earned mixed reviews since his big-money move from RB Leipzig in 2018.

“Naby, you’re right, how it is for all of us – especially for players more than for me – it’s important that we can train consistently and play consistently,” Klopp stated in his press conference ahead of the final.

“That’s possible when you are not injured and that’s what happened to Naby this year.

“He is in a perfect age, he is more and more experienced. After the adaptation from the beginning when Naby came here, that’s the normal period when you arrive at Liverpool, or when you arrive in my team, that you usually need time to adapt.

“In this area especially in midfield, Fabinho needed that time and these kinds of things.

“The problem was, after Naby adapted he got injured, or in that time already, and that’s not helpful. Now he is as well in the shape of his life, I would say, played a really good season for us, an incredibly important player. That’s it.”

They’ll need him in the form of his life if they are to overcome Madrid to secure their seventh European Cup.