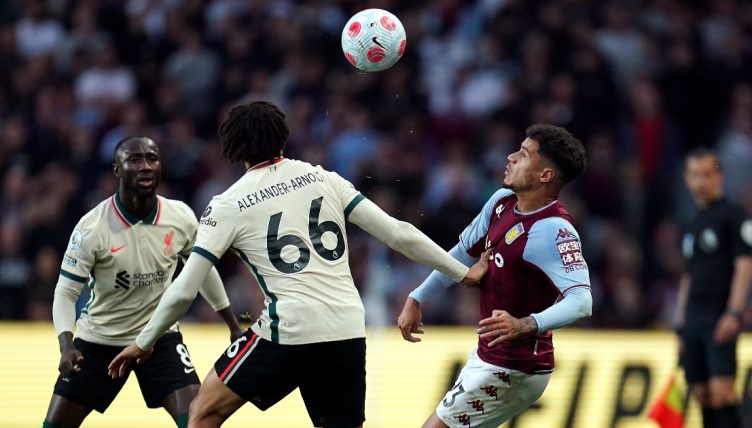 Liverpool midfielder Naby Keita produced one of the worst attempts at a finish you’ll see all season during their clash away to Steven Gerrard’s Aston Villa.

Jurgen Klopp named a much-changed line-up ahead of Saturday’s FA Cup final against Chelsea, with key men Mohamed Salah and Thiago Alcantara dropping to the bench as the likes of Diogo Jota, Curtis Jones and Keita were rotated in.

If there was any question over whether Liverpool hero Gerrard would make it easy for his former side, they were emphatically answered when his Aston Villa side produced a strong first-half performance.

“For us it (making changes) is the only way, just to push players through all the time and for us we have the quality to use,” Klopp told Sky Sports ahead of kick-off.

Klopp’s Reds went a goal behind after just two minutes, as former Manchester City man Douglas Luiz opened the scoring for the hosts. Liverpool struck back through Joel Matip a couple of minutes later, but Villa continued to go toe-to-toe with the visitors, asking questions of their backline and defending well.

But arguably the key moment came midway through the first half when Keita missed a glorious chance to put Liverpool ahead. It was one of the first times in which Trent Alexander-Arnold got forward and played one of his trademark crosses into the opposition box.

The right-back’s low drive arrived at the perfect height for Keita to get his shot off straight away, but the Guinea international totally mistimed his effort, making a total pig’s ear of the chance as he swung his leg and missed the ball completely.

The game remained all square at half-time, putting Liverpool under pressure to deliver in the second half. Failure to win at Villa Park would surely see Manchester City retain their Premier League crown.