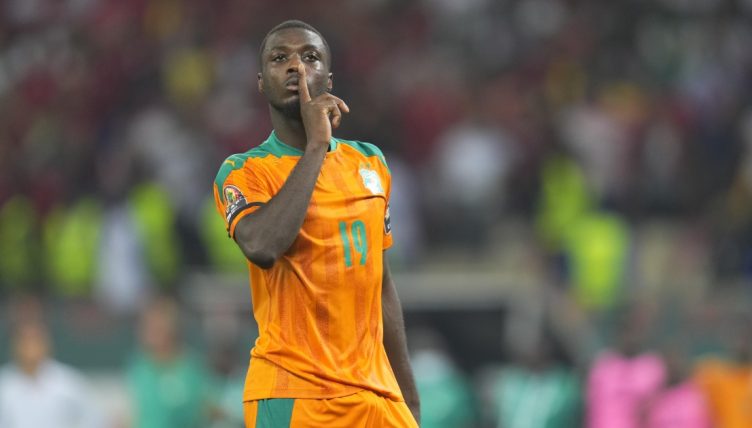 Nicolas Pepe’s future at Arsenal remains uncertain but he provided a timely reminder of his ability with a wonderful solo goal for Ivory Coast in their international friendly against world champions France.

Pepe was Arsenal’s record signing when he made the £72million switch from Lille in 2019 but he’s been inconsistent during his two-and-a-half years in England.

He has started only five Premier League matches this season, finding the net just once in 15 outings, and the Ivorian has been mainly used as a substitute in 2022, coming on for cameo appearances later in the game.

The 26-year-old netted 16 times in all competitions last season but many Arsenal supporters are yet to be fully convinced that he has fulfilled his price tag – and club legend Ray Parlour agreed with them.

“Nicolas Pepe can be a frustrating player because he blows hot and cold,” Parlour said at the launch of new exhibition ‘Football: Designing the Beautiful Game’.“He’s capable of incredible things, but then he has a more limited impact for a few games.

“Pepe occasionally provides moments of magic which shows why Arsenal chose to spend big money on him, but as things stand you can’t rely on him to fire you to trophies because he lacks the consistency you need at the top level.”

Despite his inconsistencies, Pepe’s ability has never been in doubt and he scored a wonderful goal during Friday night’s match in Marseille.

The game between France and Ivory Coast was just under 20 minutes old when Pepe latched onto a beautiful through ball by Ibrahim Sangare.

After showing Lucas Hernandez a clean pair of heels, Pepe raced towards goal and slotted the ball past Hugo Lloris at his near post to give the African side a shock lead.

Pepe’s future at Arsenal may depend on whether the club reach the Champions League next season but there’s never a bad time to remind everybody of your immense talent.

Nicolas Pepe has so much more in him, that’s crazy.
What he showed at Arsenal at the moment isn’t 10% of what he can do…