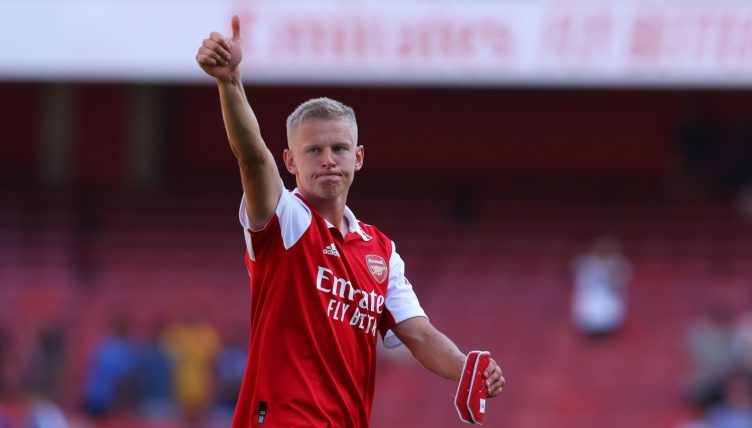 Despite not being in the matchday squad for Arsenal’s 2-1 win over Fulham, Oleksandr Zinchenko still showcased his passion.

Zinchenko spent six years at Manchester City and established himself as a strong fan favourite at the Etihad due to his versatility and dedication.

But he decided to leave in search of regular first-team football and followed Gabriel Jesus to Arsenal, joining the Gunners in a deal worth an initial £30million.

“First of all, his mentality,” Mikel Arteta told Arsenal’s official website when asked for his thoughts on the Ukraine international. “He’s used to winning – winning is the only thing and winning in the right way.

“He’s a perfectionist and a really demanding boy, I know him so well, and after that he brings qualities that we didn’t have in the squad. He gives us a different option to play within the role in different spaces, and I’m really happy to have him.”

The 25-year-old has made an immediate impact at Arsenal, impressing in wins over Crystal Palace, Leicester City and Bournemouth.

But he suffered a slight sprain to his left knee in training ahead of the game against Fulham and was left out of the matchday squad as a precaution.

Zincehnko was still pitch-side for the match and watched on as goals from Martin Odegaard and Gabriel gave Arsenal a 2-1 win.

During the closing stages of the game, he left the bench and started arguing with the fourth official before being told to return to his seat. His injury didn’t seem too bad and the Ukraine international will be hoping to feature in Arsenal’s upcoming Premier League games against Aston Villa and Manchester United.

“I’m even happier than last week, I think the performance was top,” Arteta said after the win over Fulham.

“I think from the start to finish we went for it, we had periods where we had complete control and dominance of the game and created many chances, many shots and many arrivals in the final third, but it wasn’t happening. It was just a matter of time and being patient and not making a mistake.

“We did make a mistake, but then the best thing I think is the way the team reacted and Gabi reacted against adversity to overcome the situation. Obviously, when you have the character and support that we have in the stadium, that’s easy to do.”

Oleksandr Zinchenko arguing with the fourth official towards the end of the match against Fulham yesterday.

Not even in the matchday squad, but still being as passionate as ever! 🤩💯 #afc pic.twitter.com/6GSR9ygbUQ