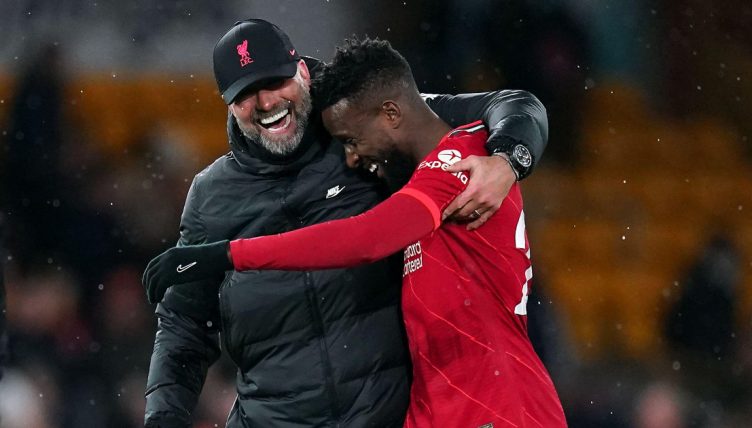 Liverpool beat their heated rivals Everton 2-0 at Anfield to move within one point of Manchester City, and Divock Origi added yet another derby goal to his collection, with his strike off the bench helping seal the win after Andy Robertson’s opener in the second half.

Origi looks set to leave the club this summer, but graced what could be his final derby with yet another big goal off the bench, and is extremely popular amongst the Liverpool faithful.

The Belgian is a scorer of big goals, which includes multiple derbies as well as the Champions League final, and he delivered again to put Everton in real danger of a first relegation from the Premier League.

Manager Jurgen Klopp embraced Origi at full time, highlighting the magnitude of the victory in such an important game as Liverpool chase a quadruple sweep of trophies.

“[Origi] is an incredible striker and for different reasons he did not play that often, but I hope one day he finds a manager that plays him more than I do,” Klopp stated in December.

“He’s one of the best finishers I’ve ever seen in my life. In this great team, with our [front] three, he doesn’t play all the time but he is a very positive boy, loves the club, wants to contribute and he did in an incredible way.”

Liverpool face Villarreal in the Champions League semi-final next, before a tough run in to compete with Manchester City for the Premier League title, and an FA Cup final against Chelsea set to take place in what could be one of the greatest months in the history of the club.

Origi doesn’t feature much these days, but when he does, it’s often to pop up with a crucial goal off the bench.

No wonder the fans love him.