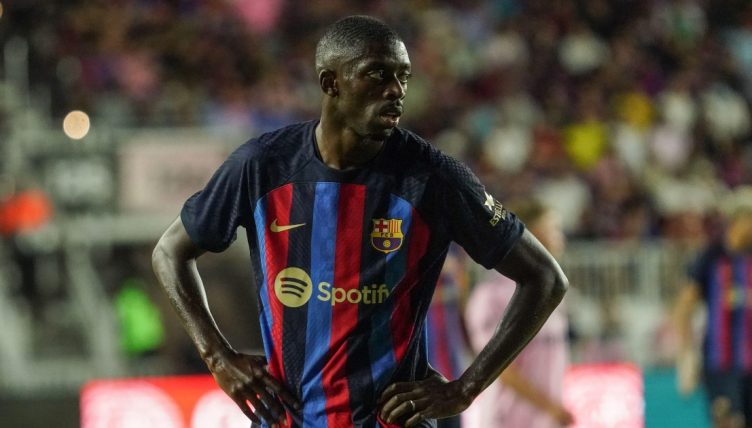 Ousmane Dembele showed why Barcelona manager Xavi was so desperate to keep him with a great performance during their pre-season draw against Juventus.

Dembele, who joined Barcelona from Borussia Dortmund in a £135.5million deal in 2017, struggled with injuries and a lack of consistency during his first four years in Spain.

But he started to fulfil his potential following Xavi’s arrival in November 2021 and registered 13 assists in 21 La Liga appearances last season.

The winger looked set to leave Camp Nou on a free transfer at the end of the 2021-22 season but ultimately signed a new two-year contract.

“It’s been long, but now everyone is happy,” Dembele said after signing his new contract. “It’s a very happy day because Barca is the club of my dreams since I was a kid and I can’t wait for the season to start so I can help.

“Winning the Champions League is a dream for me and I’m going to give everything to achieve it. There are a lot of people at the club who have helped me a lot.

“The first three years were very difficult for me, but now I have everyone’s confidence and I’m much better. I hope it will be a great year for me.”

Dembele will now face competition from Raphinha, who recently joined the club in a £55million deal and scored a brilliant goal against Real Madrid in pre-season.

But the France international was restored to the starting XI for the friendly against Juventus and took his opportunity with both hands.

He broke the deadlock in the 34th minute, embarrassing the Juventus defenders before firing past Wojciech Szczesny.

Moise Kean made it 1-1 and Dembele then restored Barcelona’s lead with another solo goal, only for Kean to net another equaliser in the second half.

“He has shown what he is capable of, making a difference from the right wing with one-on-two actions,” Xavi said afterwards. “He is a different player, special and he gives us a lot.

“He has to make a difference, be more consistent, score more goals. I don’t know Dembele from before but since I’ve arrived, I see him happy and he always tells me that he’s involved in the project. I see him like that since November, that’s why I insisted so much on [him] staying.”

Spectacular dribbling ties the Juventus defence up in knots, and then the finish is blasted through Szczęsny 💥 pic.twitter.com/N6Y9kBCMqM

And Dembélé does it AGAIN! 🔥🔥

The Juventus defence cannot cope with his lightning fast feet, and he's got the finishes to match too ⚡ pic.twitter.com/FgRRUXuArP