Watch: Dembele forces all Barcelona subs to move so he can sit near Auba 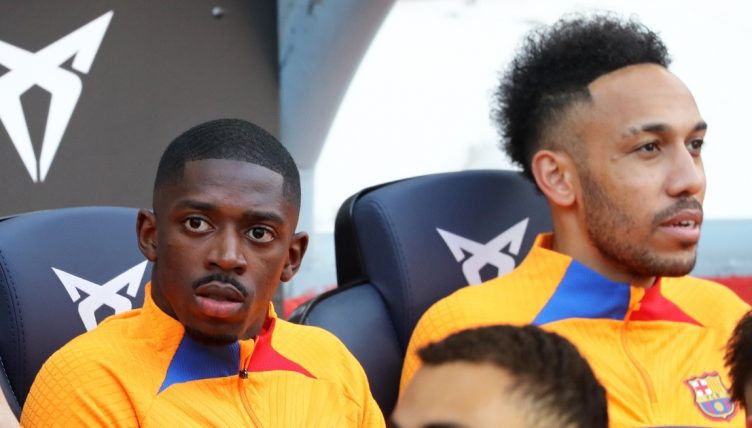 Barcelona winger Ousmane Dembele made the entire bench scuttle down so he could sit next to his old pal Pierre-Emerick Aubameyang for Sunday’s game against Atletico Madrid.

The two players know one another from their time at Borussia Dortmund, where they were lethal together – so impressive, in fact, that it put them in the shop window for big-money moves to Barcelona and Arsenal respectively.

But with Aubamayang looking to rekindle his career after being forced out by Arsenal boss Mikel Arteta, there’s something of an awkward dynamic with Dembele, who was in a similar situation at the Camp Nou.

Club president Joan Laporta made no secret of his desire to offload Dembele in January in a bid to save on his considerable wages as he enters the final few months of his current deal at Barcelona.

Former Arsenal captain Aubameyang was asked about Dembele’s future at his own unveiling and replied: “As I said before, I hope that both parties find a solution. I cannot decide that.

“Every player that comes here has to adapt. I have to adapt, but I’m ready to play. I’ve seen a lot of games and I can adapt and play.”

It had been suggested that the France international would be frozen out entirely in the coming months, with manager Xavi Hernandez keen to look to the future and build his side around players that will remain at the club next season.

But it’s imperative for the club’s finances that they qualify for the Champions League next season, with Sunday’s 4-2 victory over Atletico Madrid a big result in the race for the top four.

Xavi evidently believes that Dembele can help Barcelona in that objective, and welcomed him back to the bench – alongside new boy Aubameyang – for the clash against Diego Simeone’s men.

“Dembele is part of the club and the squad, he has a contract,” explained the Barcelona boss.

“We met with the president, the board and the technical secretariat and we have decided, just as we said [whether] he was renewing or leaving, that he is part of the squad and we cannot shoot ourselves in the foot.

“We have to use him, he can help us. He has been a good professional. It is a club decision and I’ll use him when I think it’s convenient. He’s one more [player],” he added.

Dembele remained on the bench, but on this evidence the pair enjoy a good relationship, and it’ll no doubt be interesting to see them reunite on the pitch in the near future.

Dembele told the whole bench to move so he could sit next to Auba 😅 pic.twitter.com/6TmdNYb6p8