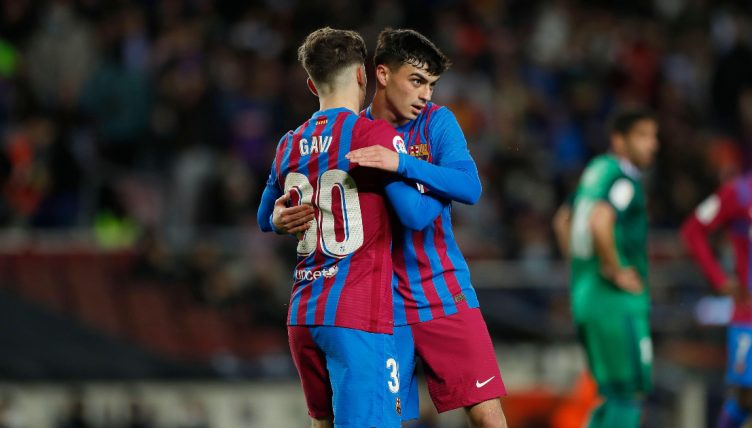 Barcelona are on their way back up after a few years of mismanagement and they have their core of top quality youngsters to thank, as teenage superstar Pedri scored against Levante with the help of Gavi.

After going 1-0 down to Levante, courtesy of a Jose Luis Morales penalty, Pierre-Emerick Aubameyang’s equaliser had gotten Xavi’s men back into the game, and Pedri fired the visitors ahead at Estadio Ciutat de Valencia.

19-year-old Pedri has established himself as one of the best youngsters in world football and is a mainstay in the starting XI for both Barcelona and Spain, whilst 17-year-old Gavi is also making waves for club and country.

The goal came as a result of sheer brilliance from the pair. Gavi picked the ball up on the right-wing and turned the Levante defenders inside out with a mazy dribble before crossing to Pedri, who found the bottom corner with a first-time finish.

Despite Levante finding a late equaliser from the penalty spot, Barcelona would have the last laugh as Luuk de Jong’s 93rd-minute goal secured them all three points in a chaotic victory, which would not have been possible without the two Spanish sensations.

At the other end of the age spectrum, 38-year-old Dani Alves, who returned to the club in January, recently praised both youngsters.

“He [Gavi] was a big surprise for me. Despite following Barça, I didn’t know him. He’s a player with incredible quality that, on top of that, has a competitive madness. He’s more aggressive than Pedri,” Alves stated.

“Without wanting to launch too many rockets, I think these players can mark an era at Barca like Xavi and Iniesta did. For their quality and the will they have. Current football is a bit different, but they have everything they need to succeed.

“He’s [Pedri] a particular person, an old soul, and on another level. it’s amazing to have him by my side. I’m very lucky, I’m seeing incredible things from the front line. I don’t like to compare him to anyone but in football it’s inevitable.

“Don Andres (Iniesta) is don Andres. For me Pedri is not Xavi or Iniesta, but a mix of the two. I even think he can score more than either did. He tries a lot from the edge of the box, he shoots well, he’s improving a lot in that aspect.”

With goals like this, the future certainly looks bright at Barcelona.