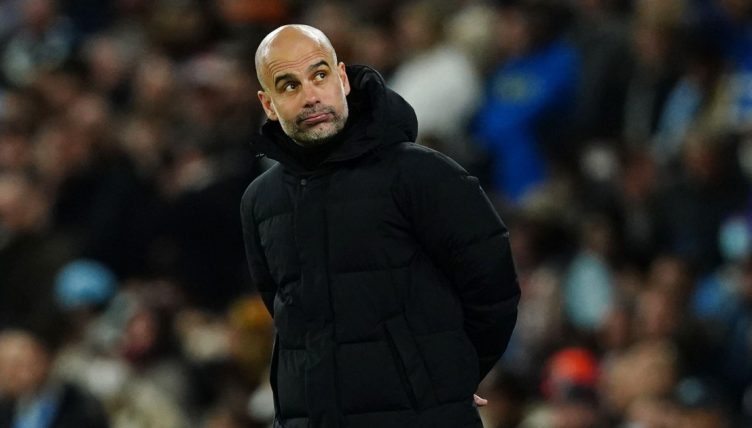 Manchester City manager Pep Guardiola is undoubtedly the leading manager of his generation but he’d be a rubbish poker player – as his reaction to Vinicius Junior’s goal for Real Madrid during their Champions League semi-final proved.

City flew out of the traps against the Spanish champions and goals from Kevin de Bruyne and Gabriel Jesus gave them a 2-0 lead within the first 10 minutes of Tuesday night’s encounter.

But Guardiola’s side wasted a hatful of chances to extend their advantage, with the City boss showing his fury at Riyad Mahrez’s decision to shoot instead of teeing up Phil Foden for a tap-in.

And his fears seemed justified when Karim Benzema poached a supreme effort to drag Madrid off the canvas and back into the tie.

City restored their two-goal lead through Foden’s close-range header after the interval but, within two minutes, Madrid had cut the deficit again – and left Guardiola spitting feathers on the touchline.

Nothing looked on for Vinicius when the ball came to him on the halfway line but the Madrid attacker took Fernandinho out of the game with a brilliant dummy that made Guardiola sink to his knees.

The City manager could only look on as Vinicius tucked the ball past Ederson and he took out his frustrations on a bemused fourth official.

Despite this, City won the match 4-3 and Guardiola declared himself immensely satisfied afterwards.

Asked if he was upset about City’s numerous missed chances, Guardiola said: “We miss them but we create them. We were there all the time. We were there. Listen, not one complaint about the result, the performance, anything.

“I am so proud, I’m so incredibly happy of the way we performed in front of the world against a team that have an experience with that. We did everything to win and with courage, with the ball, without the ball.

“We want to be there to put on a good show.”