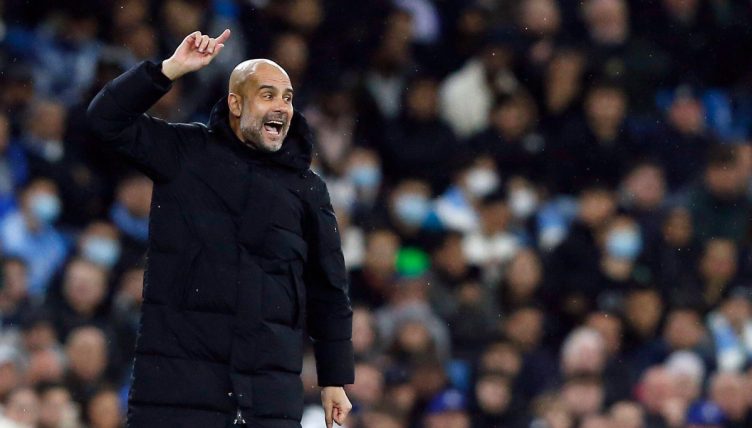 Manchester City’s 2-2 draw with Liverpool was compelling viewing as the teams at the top of the Premier League played out a high quality and entertaining match at the Etihad.

Goals from Diogo Jota and Sadio Mane cancelled out efforts from Kevin De Bruyne and Gabriel Jesus, as Liverpool travelled to Manchester one point behind their title rivals.

With both teams fighting on multiple fronts domestically and in Europe, each of these heavyweight clashes has the potential to help build or destroy the momentum of either team, and potentially define the rest of their season.

Whilst they have been fantastic viewing for the neutral, one of the managers is less keen for so many high-pressure games as City boss Pep Guardiola jokingly described Liverpool as “so annoying.”

Speaking to NBC Sports after the match, the Spaniard was asked what factors would make a difference in the remainder of the title race.

“I would like to know,” he said. “Now we have to travel to Madrid with a very big effort, then after we have the FA Cup game against them (Liverpool) in six days…they are so annoying.”

Despite this quip, there is mutual respect between Guardiola and Liverpool boss Jurgen Klopp, who are undoubtedly two of the best managers in the world.

“I don’t know if Jurgen respects me but I respect him a lot,” Guardiola stated after the game. “He makes me a better manager… his teams are positive, aggressive and they want to attack. I try to imitate him.

“We aren’t friends, we don’t have dinner together, we will have dinner one day in the hall of fame, I have his telephone number but I don’t call him. I have a lot of respect for him and he knows next Saturday, we’ll try to beat him.”

After such an intense affair in the 2-2 draw, many are anticipating a similar battle at Wembley as both sides battle in the FA Cup semi-final.