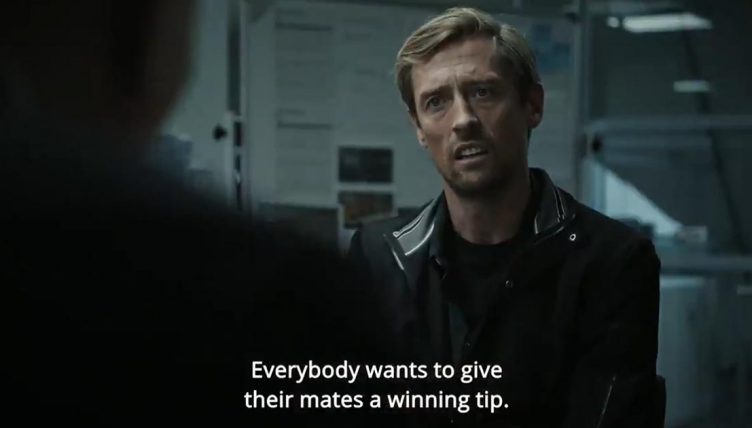 We’re ridiculously excited about the return of Line of Duty this weekend – but thankfully we have had our appetites whetted in the meantime with a Paddy Power spoof starring Peter Crouch and Barrie from Eastenders.

Regular readers of these pages will know we were huge fans of Paddy Power’s Pundits mini-series last year – we still think about Curbs’ cans pretty much daily – and ever since Extras we’ll watch literally anything featuring Shaun Williamson, aka Barrie.

Throw Crouch into the mix and it’s fair to say we didn’t need much persuading to watch Paddy’s latest offering ahead of the Cheltenham Festival, which shows Crouchy hauled into a police station “on suspicion of providing cr*p horse racing tips.”

He initially denies any involvement, but in true Line of Duty style he’s soon presented with irrefutable evidence, including a video of him bragging about being the best mate of Cheltenham legend Ruby Walsh.

And after a further grilling from Barrie, the former England international eventually admits to lying about his inside knowledge “so people think I’m a hero”.

Crouch, though, is given a lifeline with an offer to give up the rest of his Cowboy Tipster gang, which typically includes Jermain Defoe, Niko Kranjcar and a mystery leader known as ‘H’.

In return, he won’t have to wear a giant badge with the phrase “I give out sh*t horse racing tips” for six weeks.

Ending on a cliff-hanger, Crouchy is released and answers the phone to his mysterious boss. He reassures him that there’s “nothing to worry about,” leaving viewers in suspense as the series is to be continued.

Paddy Power said: “We’ve all got those mates who claim to know their stuff when it gets to Cheltenham time, even though everyone knows their tips are useless. So, to capture that sentiment, we brought in Peter Crouch to help us… because he hasn’t got a clue either.

“I have to say, I don’t think I’ve seen such a good performance from Shaun Williamson since he sang Something Inside So Strong at the 2014 World Indoor Bowls tournament. Rumour has it our video is actually more entertaining than the real show, too.”

We take great offence to that last line as big LOD fans, but the spoof is definitely well worth a few minutes of your time. Watch it below.

Know a mate who gives out crap tips during the #CheltenhamFestival?

ACT-12 are on the case. Starting with @petercrouch…