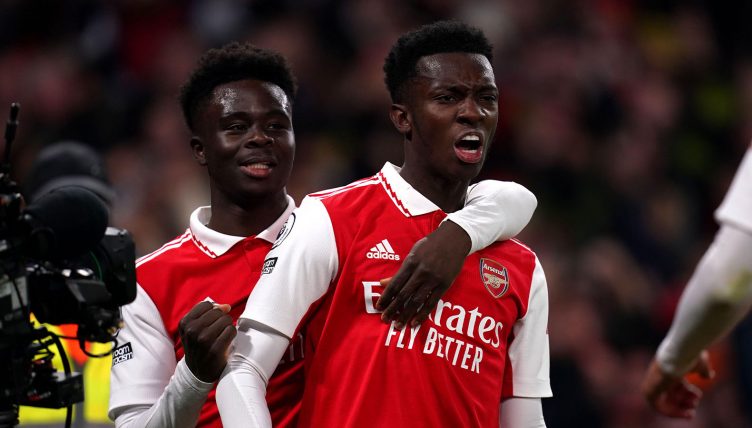 Arsenal took a huge step forward in the title race this weekend with a thrilling 3-2 win over Manchester United and Peter Drury’s commentary makes it even more impactful.

Mikel Arteta’s side found themselves behind after Marcus Rashford gave the away side the lead with a superb strike. That goal makes it nine for the season for the United forward.

Arsenal soon hit back through Eddie Nketiah and they continued to gain momentum from there. The Gunners took the lead themselves through Bukayo Saka before Lisandro Martinez levelled things up.

Nketiah produced the match-winning moment in the 90th minute and sent the Emirates crazy. The result maintains Arsenal’s five-point lead over Manchester City, with a game in hand.

Arteta was impressed with his side, he told the club website: “Well, especially after coming back, winning the London derby away from home, the way we played, today we played a completely different team that has very different demands and a way of playing.

“Going down against this team straight away is extremely dangerous because you can start to try to attack in ways that they are going to punish you.

“We came back in the game at 2-1 and then exactly what happened at Old Trafford happened again, at 2-1 we were in total control of the game.

There is still plenty of time to go in this Premier League season, but Arsenal are now well within the title race. Arteta is hopeful that this result will have given his players the confidence to believe.

“At the same time, don’t get confused and we talked about that in the last two or three days, that we know our reality, we know still how much we have to improve and we know what has taken us to the position that we are in today and we have to reinforce that every single day.”

The Gunners have averaged 2.63 points per game so far this season and are projected to pick up 100 points as things stand. Next up in the Premier League they face Everton and Brentford, before facing Manchester City.

Arteta has his side heading in the right direction and Drury’s wonderful commentary makes their triumph over the Red Devils even more impactful.