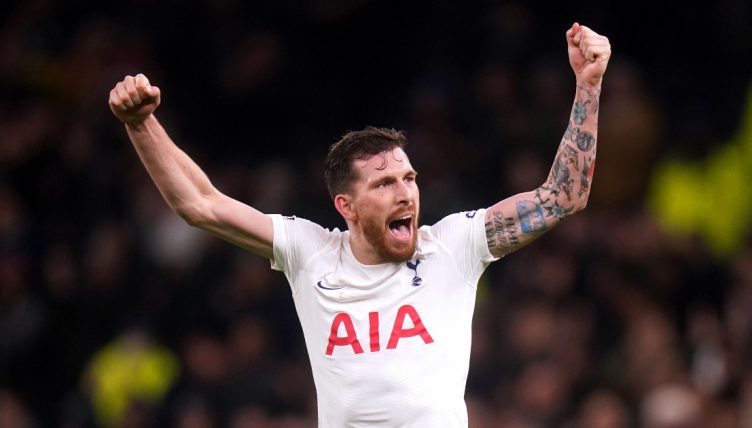 Two injury-time goals from Steven Bergwijn gave Tottenham a dramatic 3-2 victory at Leicester – but Bergwijn could have been sent off if it hadn’t been for the quick-thinking of team-mate Pierre-Emile Hojbjerg.

Spurs were heading for defeat on Wednesday evening before Bergwijn, who hadn’t scored all season, popped up with a pair of stunning strikes to give Tottenham fans their best moment since beating Ajax in May 2019.

“In the past when someone asks me about Steven Bergwijn I was very clear,” he said during post-match press conference on Wednesday night.

“I said that for me he is an important player because he has characteristics that in our squad we don’t have many creative players.

“He is very good in one vs one, good to beat the man. He can play striker, he can play number 10 and for us, for me, he is an important player and we have to try to improve, to become stronger, not to lose a player and become less strong.”

But Bergwijn might have been dismissed if it wasn’t for a selfless act by Hojbjerg.

After jumping into the crowd, understandably, following his second goal, Bergwijn was tugged back by his team-mate to prevent him from being sent off.

Hojbjerg had previously prevented Harvey Barnes from putting Leicester 3-1 up and his contribution on a memorable evening deserves to be praised.

Just realised that Hojbjerg stops Bergwijn from getting sent off. With the emotion of that moment, to have that calmness and professional mindset is elite. #Hojbjerg #COYS pic.twitter.com/T3gGmP9TEV