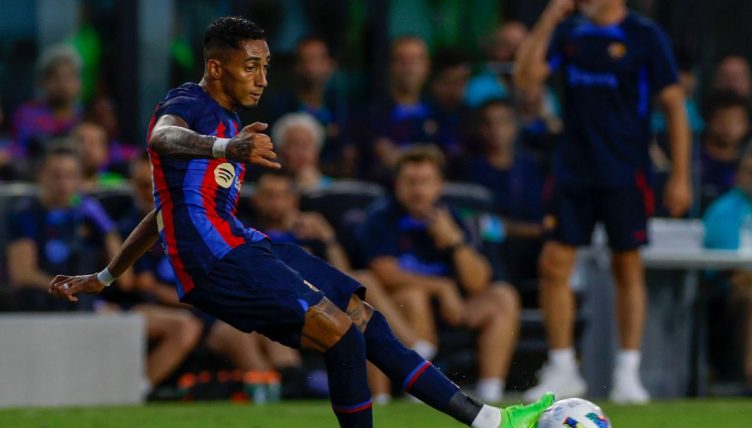 Raphinha’s move to Barcelona is one of the most talked about of this summer’s transfer market and he’s already started living up to the hype by scoring a deliciously cushioned side-foot volley in his first pre-season game for the club.

Raphinha signed for Leeds in 2020 and quickly impressed in the Premier League, showing off his mouth-watering bag of tricks and drawing the attention of the world’s biggest clubs.

A major transfer was inevitable and there were plenty of sides who wanted the former Rennes and Sporting winger. But Raphinha had his heart set on Barca and, after a drawn-out negotiation, the club made sure he got his wish and theirs.

Raphinha officially joined the Catalan giants for a £50million initial fee on 15 July.

While there has been much discussion around how Barcelona can afford to pay such a sum given their financial pickle, Raphinha is undoubtedly an exciting addition.

And in his very first game in a Blaugrana shirt – a pre-season friendly against MLS outfit Inter Miami – Raphinha gave a little glimpse of what he might do at Camp Nou.

Barcelona ran out very comfortable 6-0 winners at the DRV PNK Stadium in Fort Lauderdale and the Brazilian was on hand to bag the second of his side’s six.

Ansu Fati sent a floating cross to the back stick and Raphinha cushioned a delightful, guided volley across the goalkeeper and into the net.

Admittedly, ‘keeper Nick Marsman might feel he could have done a little better, but we’re going to give the credit to Raphinha for having the presence of mind and control to hit the ball first time, catching the Inter shot-stopper off guard.

After the game, Raphinha posted a video on Barca’s official Twitter feed sending a message to his new fans. “Hi, Culers,” he said, “this is Raphinha. I’m very happy to have scored my first goal! See you soon.”