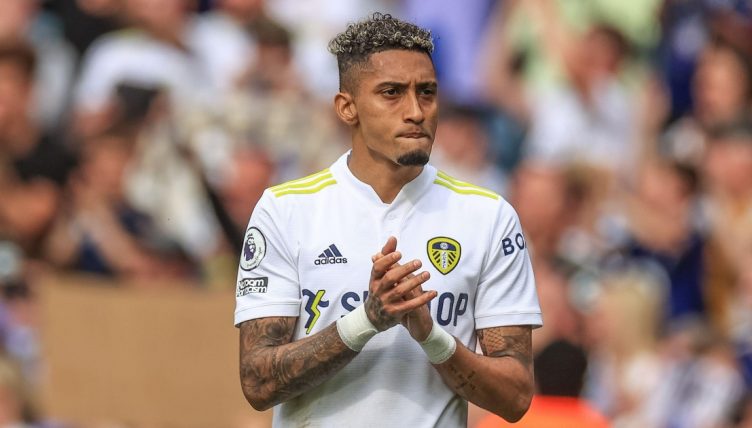 Chelsea are discussing personal terms with Raphinha after finalising a transfer agreement with Leeds United – and Fabrizio Romano has described how the 2021 European champions submitted three bids before shaking hands with Leeds.

The Brazil international was heavily linked with Premier League rivals Arsenal earlier this month, but Chelsea are now in the driving seat to land his signature.

Arsenal have been reluctant to meet Leeds’ £60-65 million valuation for Raphinha but Chelsea manager Thomas Tuchel has agreed to pay the asking price.

And, according to Romano, Chelsea are now progressing with contract talks with Raphinha and his agent Deco as they look to secure the transfer.

In a tweet, the transfer insider said: “Chelsea and Leeds have reached a full agreement for Raphinha! An official bid accepted around £60/65m [add-ons included].

“Main part of the amount to be paid immediately. It’s done between clubs. Talks are now ongoing on the player’s side on personal terms and contracts. [Todd] Boehly, on it.”

And the transfer guru has explained the process behind the deal on his YouTube channel below.

There has been a dramatic twist in the transfer pursuit of late, with Barcelona said to be ‘very alive’ in a deal for the Chelsea-linked star. The Brazilian was said to be considering personal terms after Leeds United accepted a £55 million offer from Chelsea.

However, his preference appears to be Barcelona as Raphinha and his agent Deco could look to make a deal to the Camp Nou happen.

While Barcelona have always been his preferred destination, it was recently reported by The Athletic that Chelsea would be the next club on Raphinha’s favoured list.

And Chelsea will be playing Champions League football next season, which has given them an edge over Arsenal in the chase for the 25-year-old forward.

Raphinha is set to be Leeds’ second high-profile sale of the summer with Kalvin Phillips also on the verge of a £42m move to Manchester City.