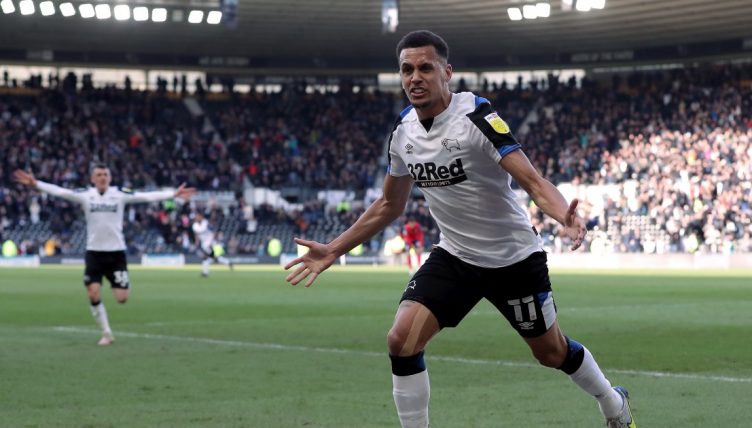 Former Manchester United youth player Ravel Morrison scored a sublime scissor-kick winner for Wayne Rooney’s Derby in their Championship match against Preston as they continue to fight against relegation.

His 80th-minute scissor kick was the only goal of the match as Derby ran out 1-0 winners.

Derby had been playing against ten men since the 32nd minute when Preston’s Liam Lindsay was given his marching orders.

But Derby failed to make their chances pay and by the 55th minute found themselves reduced to ten men as well, with Max Bird seeing red.

With the game at 10 v 10, it looked as if it would peter out to a goalless draw, but chaos resulting from a corner saw Morrison produce a stunning and vital strike for his club.

The ball was whipped in in the 80th minute and the initial header was saved by Preston goalkeeper Daniel Iversen.

Another shot produced an even more impressive goal-line save before the ball fell to Morrison who ran onto it.

He jumped, swinging his left leg in the air before drawing it back and firing with his right to meet the ball.

It flew past Iversen and into the net, sending the Derby fans into raptures.

The result means Derby are six points off of Reading, who sit just above the relegation zone on 34 points and have a considerably worse goal difference than the Rams.

It keeps the possibility of a historic survival on the cards, once thought to be impossible after Derby were deducted 21 points for entering administration.

Morrison was once regarded as one of the most exciting prospects in English football but failed to live up to his potential.

Yet he has impressed at Derby and is now playing at an international level with Jamaica.

“When you get to know Ravel, he’s a great man,” Rooney assistant Liam Rosenier has said.

“His ability in training is outstanding, I mean world-class. He was outstanding and we’re going to need him for the rest of the season.”