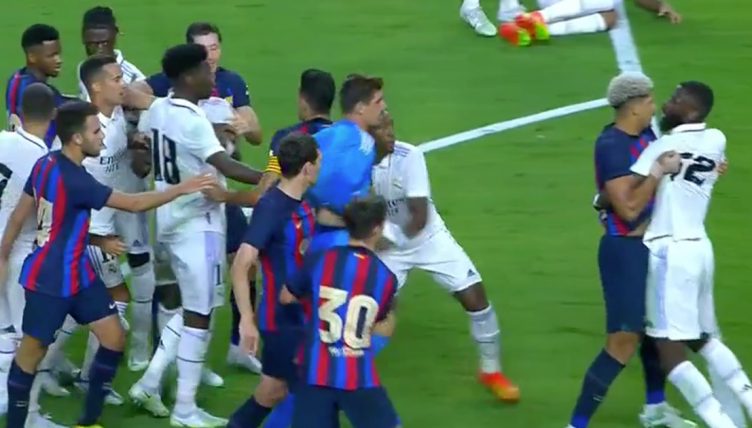 Antonio Rudiger, Eden Hazard, Vinicius Junior, Sergio Busquets and Ronald Araujo were all involved as a so-called friendly between Real Madrid and Barcelona descended into an all-out scrap.

Barcelona were victorious in El Clasico, which was played out in front of spectators at the Allegiant Stadium in Las Vegas, and it definitely didn’t lack a competitive edge.

“At Barcelona, there are no friendly matches. We always want to win, especially against Real Madrid,” Barca boss Xavi Hernandez after the match – and it’s clear to see there was truth in his words when a skirmish erupted shortly before half-time.

Former Leeds United star Raphinha had already scoring what proved to be the match-winner with a stunning strike in the 26th minute, and a short while later Araujo absolutely burned Rudiger for pace – a moment which might explain why the two defenders came to blows in the middle of the ruckus.

Vinicius Junior, who scored the winning goal in the Champions League final against Liverpool last season, looked absolutely raging and had to be dragged away from Barcelona captain Sergio Busquets.

Araujo charged in, which seemed to ignite things further, resulting in plenty of argy-bargy with Real Madrid’s new summer signing Rudiger – anyone who watched the Germany international play for Chelsea knows full well that he’s not a player to shirk a scrap.

Over half a dozen players were involved as frustrations spilled over onto the pitch and it took several minutes for calm to be restored. There appeared to be no hard feelings come the end of the match, with both sets of players and the two managers magnanimous.

“It was a good match with a lot of intensity, especially in the first half. I thought it was an even game,” Real Madrid manager Ancelotti said after the defeat.