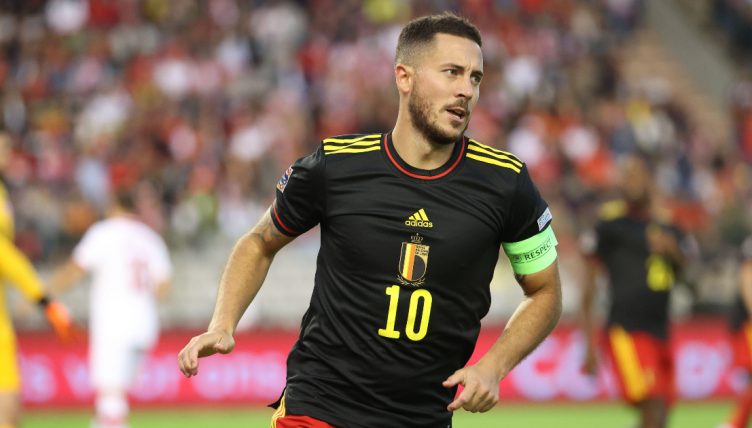 Real Madrid forward Eden Hazard looked back to his best for the most part as Belgium thrashed Poland 6-1 in their Nations League clash, but he suffered an embarrassing moment as he missed what looked a certain goal.

Hazard played well in his 66 minutes, assisting former Chelsea team-mate Kevin De Bruyne to make it 2-1, while also playing with more confidence than has been on display for Real Madrid since his arrival in 2019.

However, he really should have hit the back of the net when Michy Batshuayi’s effort cannoned back off the post and fell at Hazard’s feet with the goal at his mercy.

In a flash, the 31-year-old smashed the ball wide and wheeled away in frustration. Although it did not make any impact on the result, a goal would have been the perfect confidence boost after one of the most difficult seasons of his career.

The winger failed to score a single goal in 21 La Liga and Champions League appearances, and as Real Madrid’s record signing he has come in for heavy criticism.

A failure to gain fitness and form has meant that unless he miraculously turns his career at the Bernabeu around, he will go down as the worst signing in the club’s history.

Hazard has confirmed his intention to stay at the club and prove his ability and will hope he can remain injury-free to push for a strong start to the season.

“His plan is quite clear: he is staying and he is doing so with a lot of motivation because he has had a tough time in these last years. He wants to show his quality,” Carlo Ancelotti stated in May.

“Hazard’s plans are quite clear. He is staying next year.”

When asked if Hazard will have many opportunities next season, Ancelotti continued: “I think so. There are a lot of games, there is tiredness, there will be rotations even if this season there haven’t been as many. Everyone can have their chances.”

He can’t miss chances like these for Los Blancos though.