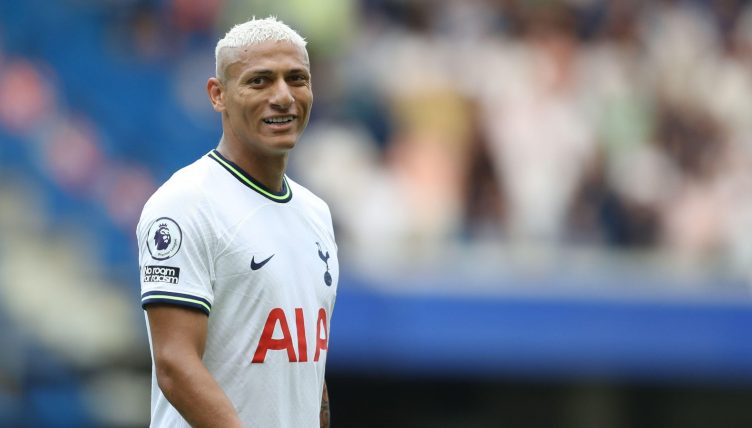 Richarlison decided to showboat during Tottenham’s 2-0 win over Nottingham Forest on Sunday with some outrageous keep-ups – and was quickly wiped out by Forest attacker Brennan Johnson.

The £60million signing from Everton hasn’t started a Premier League match for his new club and started the match at the City Ground on the bench.

But Richarlison came on during the second half and provided a wonderful assist for Harry Kane’s second goal that helped maintain Spurs’ unbeaten start to the new season.

With the game sewn up, and minds drifting towards Wednesday’s London derby at West Ham, Spurs took their foot off the accelerator during the game’s final stages which provided Richarlison with the perfect opportunity for some Brazilian magic.

Upon receiving the ball on the left flank, the 25-year-old began doing keep-ups before laying the ball off to a team-mate.

It was the kind of showboating that normally acts as a red rag to your self-respecting professional footballer and Richarlison was unsurprisingly dumped on the turf by Johnson seconds afterwards.

And Sky Sports co-commentator James Carragher was less than impressed by the forward’s antics in the dying embers of the game.

“Woah!,” Carragher said during commentary. “It does wind people up. You can’t do that. But what is he doing? He just winds people up that lad, Richarlison. He winds me up. What do you expect Johnson to do? You’re not condoning that but…”

Spurs have moved up to third in the table, level on points with Brighton and Manchester City but two behind bitter rivals Arsenal. They are also unbeaten in the league since April.

And, after the game, Spurs captain Kane told reporters: “A good win. It’s a difficult place to come; the atmosphere is really, really good. We didn’t play our best but we dug in and got the points.

“But we know we can do better. We got away with it in the first half. It’s something we need to fix, quickly.

We had a great pre-season and we feel physically really good; we’re just not showing it yet. It’s hard to say why. But we’re still winning games.

“And I feel like we’ve been better and physically stronger in the second half of most games.”

Yeah Richarlison is THAT guy pic.twitter.com/uAsp9pjnw4