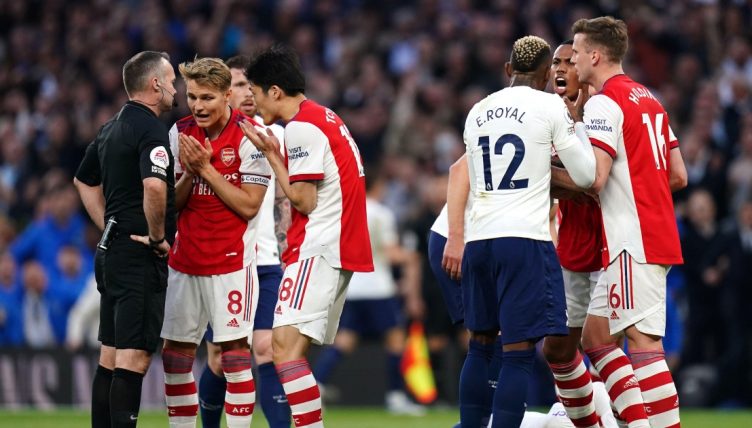 Arsenal defender Rob Holding was sent off just over half an hour into their north London derby against Tottenham.

Holding has enjoyed a period of good form in recent weeks while deputising for the injured Ben White and scored his first Premier League goal in their 2-1 win over West Ham.

After White was only deemed fit enough for the bench, he started alongside fellow centre-back Gabriel at the Tottenham Hotspur Stadium.

Harry Kane fired Tottenham in front from the penalty spot in the 22nd minute after Cedric Soares was adjudged to have fouled Son Heung-min.

Holding received the first yellow card of the game when he hauled down Son Heung-min near the touchline. The 26-year-old made a silly shoulder barge challenge on Son seven minutes later and was shown a second yellow card by referee Paul Tierney.

It was also his fourth foul of the game and all four fouls were on the South Korea international.

“I’m watching the run and he has a jab with his elbow, it comes away from his body. He’s been erratic, rash, he’s lacked composure.

“It’s madness. Mikel Arteta has big problems now. His centre-back has caused him huge issues in the first 35 minutes of this match.

“We spoke about Holding earlier in the game. Son played him. He played him and played him, like a little boy. Sometimes as a defender you’re head goes, you’re emotional and you do rash things. Son was in his head.”

After Arsenal went down to 10 men, Kane netted his second goal of the game in the 37th minute and Son made it 3-0 at the start of the second half.

Rob Holding catches Son and gets a second yellow! pic.twitter.com/Y0j6VHvPfd