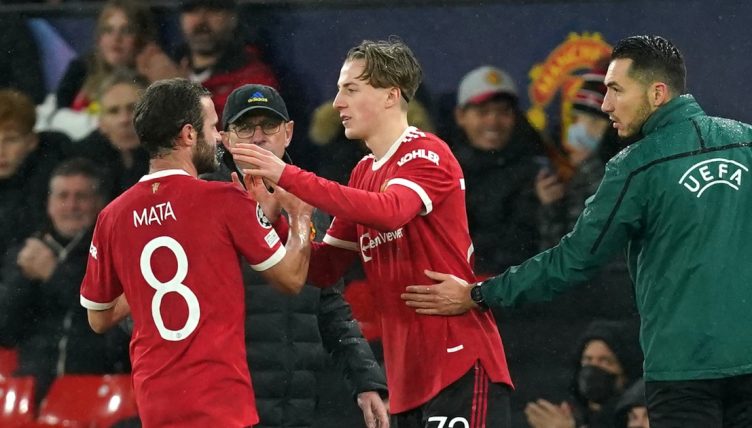 There was a proud moment for Class Of 92 graduate Robbie Savage, and a heartwarming moment for the viewers at home, when young Charlie Savage made his debut for Manchester United.

In what is surely a first, the young midfielder saw his first steps onto the Old Trafford pitch narrated by his old man as he was introduced in the closing stages of United’s 1-1 draw with Young Boys.

Savage represented the Red Devils in the youth ranks, playing alongside the likes of David Beckham and Paul Scholes, but he had to forge his career elsewhere. Now his son has done something he never quite managed and made a first-team appearance for the historic club.

Ralf Rangnick named a heavily-rotated XI from the final group stage game, which was a dead rubber for the Red Devils after they sealed the top spot with a 2-0 victory over Villarreal a fortnight ago.

The likes of Amad Diallo and Anthony Elanga were named in the starting XI, while Teden Mengi and Shola Shoretire made it off the bench alongside 35-year-old goalkeeper Tom Heaton.

And in the 89th minute came the long-awaited moment for Savage, speaking from the BT Sport commentary box at Old Trafford, as his son was introduced alongside fellow highly-rated youngster Zidane Iqbal.

BT Sport broadcaster Darren Fletcher (not to be confused with his Manchester United namesake) would ordinarily have commentated over such a moment, but he stepped aside to allow Robbie to speak as his son made it onto the pitch.

"Coming on for Man Utd, Charlie Savage for Juan Mata…"

"Wow, I never believed I'd say those words, what a proud day!"

A lovely moment as @RobbieSavage8 introduces his son for his Man Utd debut ❤️#UCL pic.twitter.com/4NLKC4BTgv