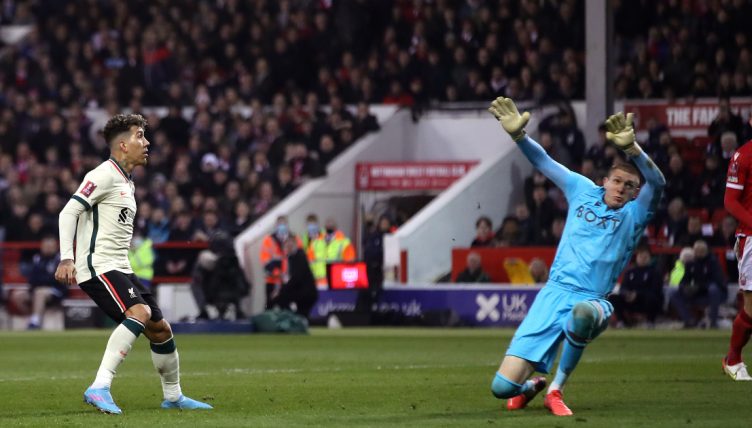 The first half of Liverpool’s FA Cup quarter-final tie away at Nottingham Forest was action-packed despite not seeing any goals. Roberto Firmino came closest to breaking the deadlock but missed a glorious chance after seeing his attempted chip saved after going through on goal.

Nottingham Forest’s run to the quarter-finals saw them knock out Arsenal and Leicester City, setting up a first meeting with Liverpool in 23 years.

The Championship side competed well, and will have been happy going into the break with the scores level – but things could easily be so different.

A defensive mixup saw Harvey Elliot play Firmino in with acres of space and just the keeper to beat, but the Brazilian attempted to lob USA international Ethan Horvath in goal, who was not easily fooled by the effort.

The goalkeeper parried the shot, before knocking the ball away from the Liverpool forward, and the ball was subsequently cleared by Joe Worrall.

Firmino is no longer has a guaranteed starting place in the Liverpool side following the arrivals of Diogo Jota and Luis Diaz, but was given a start in the Cup and has been a popular figure at the club since his signing in 2015.

Jurgen Klopp emphasised the importance of rotation ahead of the tie, which resulted in Firmino making the lineup whilst Sadio Mane, Diaz and Mohamed Salah missed out.

“I want to have a team that is fresh enough, physically and mentally, for the game and really is going for it,” the German manager stated in his pre-match press conference.

Firmino has scored 96 goals in his 317 games for Liverpool, and has written himself into club folklore after playing a crucial role in their Premier League and Champions League triumphs.

The 30-year-old should have done better with this chance though, and will hope his teammates secure a passage to make it to Wembley, where the victors will face Manchester City in the semi-final.

Ethan Horvath with a save against Liverpool in the FA Cup 👀