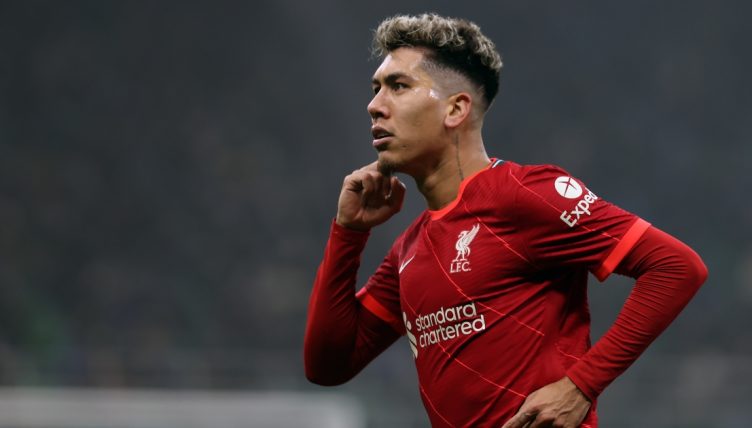 Roberto Firmino may not be first choice at Liverpool these days but the striker underlined his class with a brilliant glancing header against Internazionale in the Champions League last 16.

Firmino has been eased out of Jurgen Klopp’s starting XI by the form of Diogo Jota but the Brazil international retains the faith of numerous pundits.

Kevin Campbell has tipped Firmino to play a squad rotation role for Liverpool should he sign a new contract at Anfield.

His current deal is up in June 2023 and Campbell told Football Insider: “It’s all about the squad for Liverpool now.

“There’ll be times when Firmino sits down, but we’ve seen the likes of Mane also on the bench before.

“When you’re playing for a club like Liverpool with that many fixtures across four different competitions – everyone’s going to get their quota of games.

“I don’t think he’ll be too worried about playing every game. I think he knows that he will have to play that squad role now. He still has a very important role to play, because he’s a superb player on his day.”

Firmino clearly still has value for Liverpool – as he showed during Wednesday’s match at the San Siro.

The 30-year-old was introduced as a second-half substitute with Liverpool struggling to contain their Italian opponents.

But the forward swung the tie, perhaps decisively, towards Klopp’s side with the opening goal.

Andy Robertson floated a corner towards the near post and Firmino lept ahead of Alessandro Bastoni on the right-hand edge of the six-yard box and steered a sensational header across Samir Handanovic and into the bottom corner.

Mohamed Salah scored five minutes afterwards and Liverpool will take a 2-0 lead into the second leg at Anfield on March 8.

Deadlock broken at the San Siro in the 75th minute! And it's massive for Liverpool! 🔴#UCL pic.twitter.com/0DcgGjeo5d