Robertson tells Mane he’ll get revenge on Flamengo man; lives up to his word 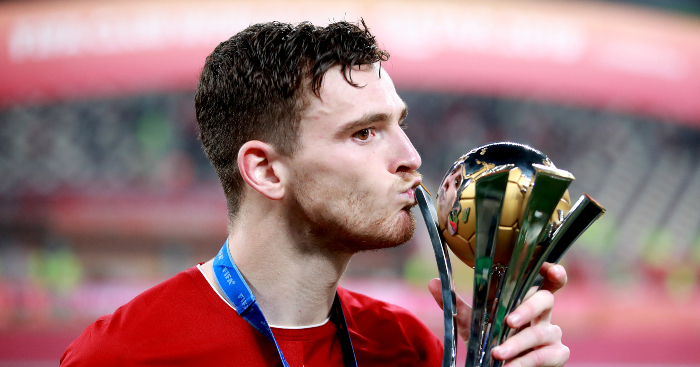 Andy Robertson did not take too kindly to some of Flamengo’s tactics in Liverpool‘s Club World Cup final victory over the Brazilian outfit on Saturday night.

Roberto Firmino bagged the winner in extra-time as Liverpool claimed the trophy in the first time in their history following a fiery encounter.

Robertson had already made headlines in the tournament after responding to a dive by a Monterrey player by shouting “f*cking hell” in exasperation, and he caused a stir on social media again in the final.

The left-back was unhappy after team-mate Sadio Mane was booked following a coming together with Flamengo’s Rafinha, despite the Brazilian appearing to commit the initial foul.

As the players walked off for half-time shortly after, Robertson was pictured telling Mane, “I’ll get him, don’t worry,” within earshot of Rafinha.

“Sadio let me get him, i’ll get him don’t worry”

And, true to his word, Robertson left Rafinha in a heap shortly into the second half.

Best moment of the game, Robertson smashing Rafinha 7 mins into second half. Man of his word pic.twitter.com/3tMTr40qJo

And the Scotland international still found time after the final whistle to have a heated exchange with Rafinha.

Robertson fuming at Rafinha still after the game. I would die for this man. pic.twitter.com/uIGCfyVamV