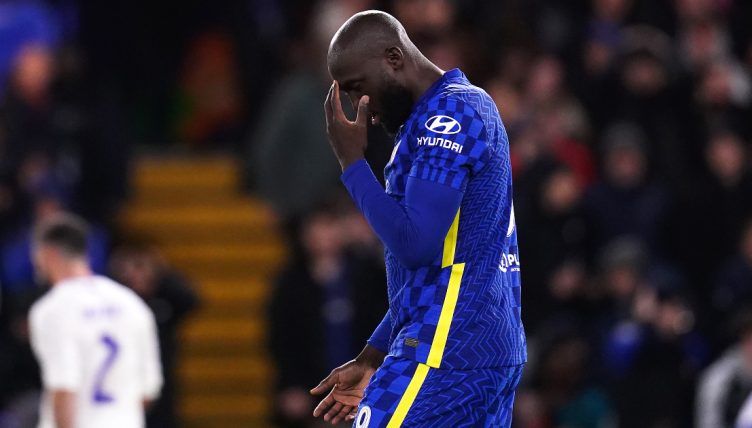 Romelu Lukaku has had a nightmare return to Chelsea since his £100million move in the summer, and had one of his worst moments yet in their 3-1 home loss to Real Madrid in the Champions League quarter-final.

The current European Champions were behind thanks to a hattrick from Karim Benzema, but had a chance to give themselves a way back into the tie when Cesar Azpilicueta’s cross found its way to Lukaku in the box via a deflection.

The ricochet meant that the ball sat up perfectly for Lukaku to simply nod in from a few yards out, but the striker somehow put his header wide, much to the frustration of the Chelsea fans.

Lukaku has scored just 12 goals in 36 games this season, and only five of them have come in the Premier League. The 28-year-old has come in for heavy criticism for both his performances as well as his attitude off the pitch, which saw him get dropped after admitting that he would like to return to Inter Milan.

The Belgian international started the Madrid game on the bench, watching Kai Havertz take his place as a false nine instead, and was brought on in the 64th minute to provide inspiration upfront.  But this miss came within minutes of his arrival.

This substitute appearance was not one to be proud of, as he took two shots, neither of which went on target, and had just four touches in his 25 minutes on the pitch.

Jamie Carragher, speaking on CBS Sports, was not impressed with the Chelsea forward, and told him to take the blame for his struggles rather than pinning it on his manager.

“It’s not down to the manager, it’s down to Lukaku,” Carragher stated after the game. “It’s not about the love from a manager.

“You spend £100million on a player to make a difference in these games, and he can’t even get in the team. He’s got to do a lot more.”

This miss could be the difference between progression and elimination.