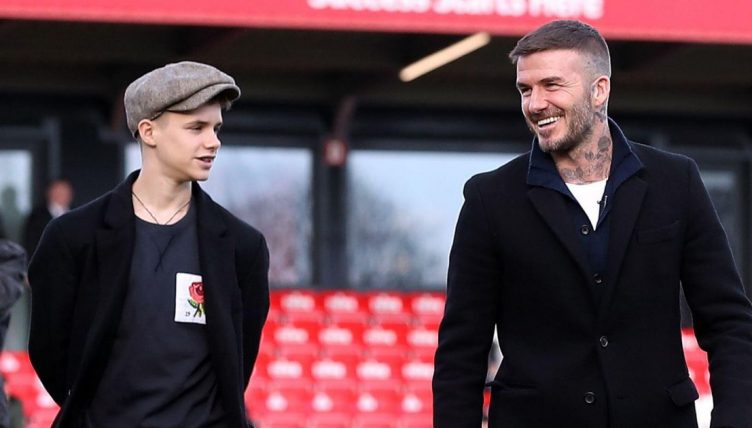 Like father, like son? In the case of Beckhams David and Romeo, that certainly seems to be the case. On Saturday night, Romeo took a leaf from his dad’s old book and sent a delicious free-kick curling into the corner of the goal during a game for Inter Miami II in the MLS Next Pro league.

Romeo Beckham was born in London in 2002 while his dad was still a Manchester United player and started off his own footballing journey at Arsenal‘s academy.

He joined Arsenal in 2014, but was released a year later and reportedly gave up on a football career for a time, instead focusing on tennis.

However, Romeo decided to pursue the same path as his dad once more in 2020 and joined the Inter Miami II, the B team of the MLS club David part-owns, in September 2021.

While it probably helps to have a club owner as your father, it appears that Romeo is not in the team based solely on his surname.

In Sunday night’s game against Orlando City B in MLS Next Pro, the third tier of US soccer, Romeo proved that he has the right peg to go with the famous name.

After getting an assist in the 77th minute to give Inter Miami II and 2-1 lead, Beckham put the icing on the cake five minutes later.

After a team-mate had won a free-kick in perfect Beckham territory, he took a four-step run-up and struck the ball right-footed with technique eerily reminiscent of his father’s.

It whipped up and over the wall, dipping perfectly on the other side and dropping delightfully into the bottom corner beyond the reach of the Orlando goalkeeper.

It was Romeo’s first professional goal and a strike that David in his Manchester United, Real Madrid or England pomp would have been more than proud of.

We look forward to seeing him score England’s winner in the 2026 World Cup final from a similar range.

Romeo Beckham scores a free kick for Inter Miami II and a) his stance and technique is eerily similar to pops and b) my god I’m watching David Beckham’s son highlights. ME: 👴🏼 pic.twitter.com/7OZSNQQy3M