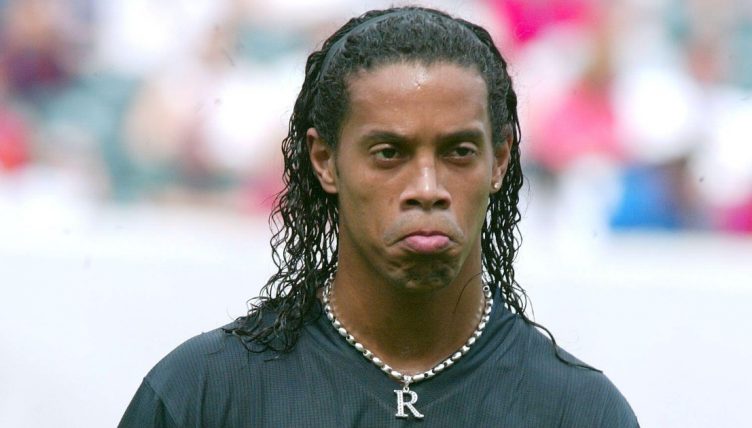 An old clip of Ronaldinho has gone viral on social media, serving a reminder that the former Barcelona and Brazil star was one of the most gifted and entertaining footballers in history.

It’s unknown exactly what the fan-shot footage is from, but it’s a pure joy to watch. It shows Ronaldinho juggling with the ball before kicking it high into the air before booting it up high.

The feathered touch to control it on its way back down is one of the most obscene things we’ve ever seen involving a footballer, and what happens next has to be seen to be believed: the Brazilian then pulls off the most perfectly casual flip-flap to nutmeg an unsuspecting team-mate.

We will never tire of watching old Ronaldinho clips, with this up there with his very best – alongside the time he taught a teenage Lionel Messi how to execute a flawless elastico.

For a certain generation of football fan, the former Ballon d’Or winner will always remain an all-time favourite, just for the sheer joy and fun he brought every time he stepped out onto the football pitch.

“No one can compare to Ronaldinho. I remember his plays, his dribbles. I remember him winning every title at Camp Nou. He made history at Barca, he made history with Brazil, and he’s still making history,” said Neymar, who grew up idolising the Selecao icon.

“I learned a lot from Ronaldinho and Robinho,” Eden Hazard once said. “Football is a tactical game and you sometimes have to be serious. But they taught me to always do it with a smile and have fun. I spent hours watching their clips on YouTube.”

“There was a period in Ronaldinho’s time at Barcelona where he was almost unplayable,” said David Beckham, who was famously his rival whilst at Real Madrid, and the player club president Joan Laporta was considering buying instead of Ronaldinho.

“Effortless, relaxed, always with a smile on his face, he’s a genius with the ball. I love Brazilian football and he is one of the best ever players from that country.”

Ronaldinho scored 266 goals in almost 700 appearances. His career saw him lift the World Cup and Copa America with Brazil, as well as further domestic titles in his home country with Gremio, Atletico Mineiro and Flamengo and the 2010-11 Scudetto with AC Milan.

But the undoubted peak of his club career came during his spell at Barcelona, where he won the Champions League and back-to-back titles and was named FIFA World Player of the Year in 2004 and 2005.

But the true measure of Ronaldinho’s career can’t be measured in statistics and bits of silver. It’s by watching him with the ball at his feet, like this beautiful clip:

This footage of Ronaldinho warming up will never get old pic.twitter.com/sub5TGRW1i

The 5 players Barcelona signed along with Ronaldinho & how they fared