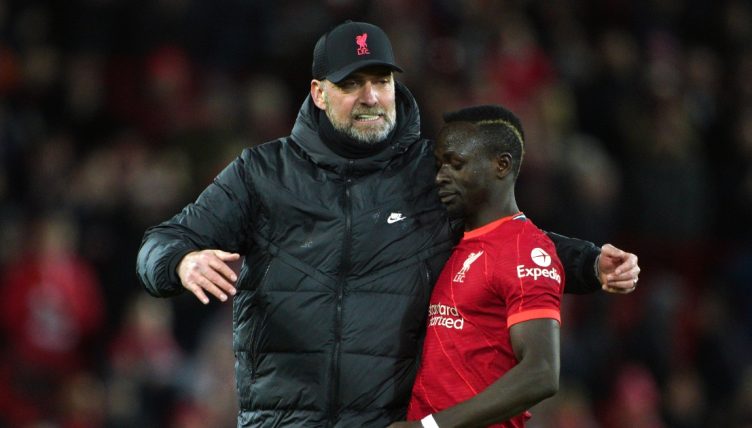 Kostas Tsimikas struck home the decisive spot-kick for the Reds in a nervy shootout at Wembley to clinch a second trophy of the 2021-22 season for the quadruple hunters.

After lifting Liverpool’s eighth FA Cup, Klopp was keen to show his delight with the result in front of the supporters. The German boss brought out his customary fist pumps that were greeted by cheers by the Liverpool crowd.

Mane also couldn’t resist joining in as he copied the actions of Klopp with a beaming smile on his face.

The 30-year-old has now racked up three trophies this term – the FA Cup, the Carabao Cup and also the Africa Cup of Nations with Senegal.

He’ll also be hoping to add a Premier League and Champions League medal to his collection before the end of May.

The forward has enjoyed one of his finest campaigns in a red shirt, but it was nearly a disappointing afternoon for him in the capital as he was the only Liverpool player to miss in the shootout.

His Senegal team-mate Edouard Mendy denied him with a neat save. But Klopp revealed after the game that it was also his fault for Mane’s failure from 12 yards out.

“Sadio’s penalty is for sure at least 50 per cent my responsibility because you have to let the boys do what they think they do, but with him I said, ‘He knows you exactly, the goalie, so do the other way around.’

“How very often in my life, I realised it’s better to shut up! But we still made it and honestly it means the world to us.”