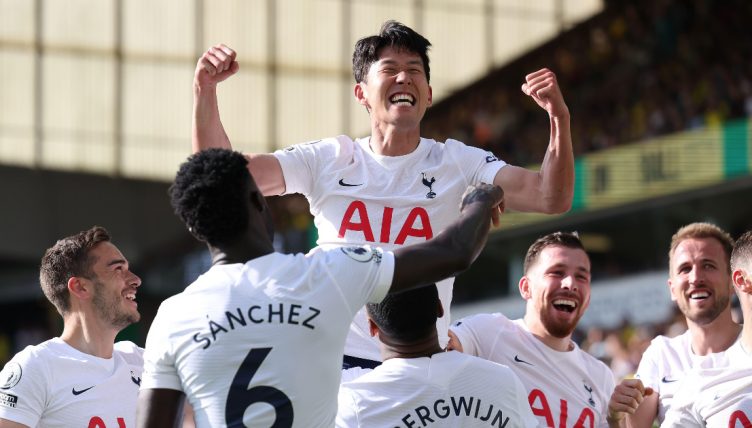 Son Heung-min was the star yet again as Tottenham won 5-0 away at Norwich to secure their Champions League spot ahead of rivals Arsenal.

His brace meant that he got to share this season’s Golden Boot award with Liverpool’s Mohamed Salah so naturally, the winger was delighted.

After his second goal, a fierce strike from distance, the 29-year-old celebrated in style with his team-mates. Fellow winger Lucas Moura lifted him up in front of the travelling Spurs support and Son punched the air as he was held aloft.

The adrenaline he felt in the moment was clear to see and was the perfect way to round off what has been a stellar season for the Spurs attacker.

Son scored 23 league goals over the course of the season but remarkably without scoring any penalties, and he also provided seven assists.

His partnership with Harry Kane was crucial to Spurs qualifying for Champions League football and manager Antonio Conte was quick to praise the pair before the game.

“I am pleased for Sonny, he deserves to stay in this position, but don’t forget the first interest is the target of the team not personal target, the personal target comes later,” Conte stated as he was asked about Son’s Golden Boot charge.

“If we are good to match both situations I am the first to be happy, but I repeat, I know Sonny thinks my way because he is a really good guy, he is a smart person, a very intelligent person. I am the first person to be happy to have a player in my team win the Golden Boot, I am the first.”

The future does look bright for Spurs and Son, and there will be plenty of excitement at the club going into next season.

You love to see it 🥹 pic.twitter.com/nM6Lk8jPAU