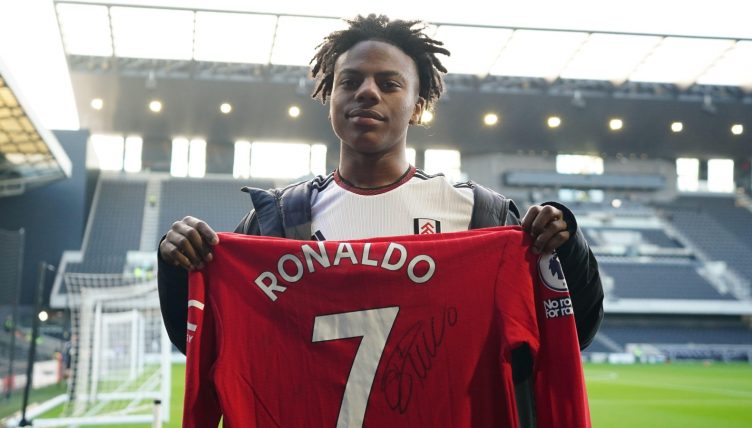 YouTuber IShowSpeed was left devastated in his quest to see Cristiano Ronaldo in action after the Manchester United forward was left out of the squad to face Fulham on Sunday.

Speed has gained popularity online for his gaming and entertainment livestreams. He is a huge Manchester United fan, and has made no secret of his admiration for the 27-year-old Ronaldo.

He has even created a song about the five-time Ballon d’Or winner named ‘Ronaldo [Sewey]’ and has made it clear that he wants to meet his idol sooner rather than later.

But the American was foiled in his quest on Thursday after Ronaldo was absent from the League Cup victory over Aston Villa and his trip to London to see his idol in Premier League action was once again fruitless.

Speed was first informed about Ronaldo’s absence versus Fulham by Jamie Redknapp when he paid a visit to the Sky Sports studio.

Although Speed was unsuccessful in his attempt to see Ronaldo in the flesh, we have a feeling he’ll meet the Portugal international sooner rather than later.

In a recent FaceTime call with former United midfielder Jesse Lingard, Speed asked if Ronaldo knew who he was.

“Yeah, definitely bro!” Lingard replied. “I swear, you know when I was there, I was saying ‘Sewey’(Speed’s unique version of Ronaldo’s SUI celebration). He knows bro, the GOAT knows you.”

Speed, who was almost in a state of disbelief, said: “Seriously, like don’t troll!”

Lingard then added: “I swear, the GOAT knows you bro. Every day, Anthony Elanga and all that were on it. Bro, trust me he knows you. You’re a celebrity now big man.”

READ MORE: Ranking every Man Utd player by how much they earn in 2022-23

TRY A QUIZ: Can you name every goalkeeper to play for Man Utd in the PL?