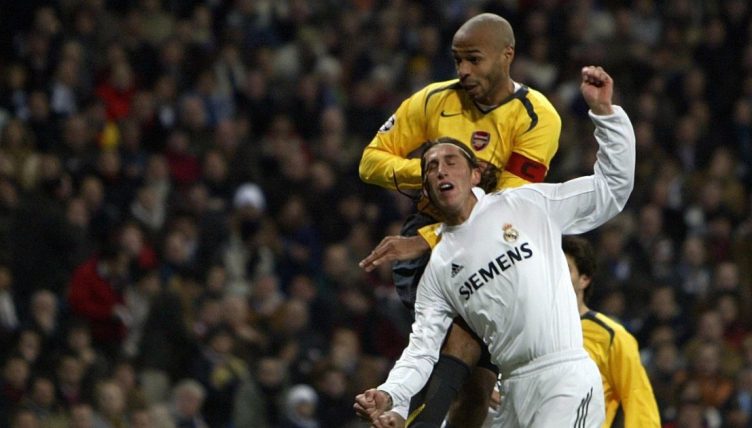 Sergio Ramos is widely regarded as one of the finest defenders of the modern era but Thierry Henry seemed to absolutely relish coming up against him – as this highlights reel demonstrates.

Henry was at his absolute peak when coming up against a young Ramos. The striker produced one of the best and most iconic individual displays of his career when he scored the match-winner at the Bernabeu to dump Real Madrid out of the Champions League.

A couple of years later, Henry arrived at Barcelona to terrorise Ramos some more in some memorable El Clasico clashes – most notably when Pep Guardiola’s vintage side went to the Bernabeu and won 6-2 on their way to a historic treble in the 2008-09 campaign. Henry scored twice on that occasion.

During his time at Arsenal, France and Barcelona, the Frenchman tested his attacking prowess against some legendary centre-halves, from Rio Ferdinand, Nemanja Vidic, Jaap Stam, John Terry and Ricardo Carvalho in the Premier League to Fabio Cannavaro, Carles Puyol and Paolo Maldini at international level.

But Henry gave a somewhat surprising answer when asked which defender he found the toughest to play against.

“Toughest as an indirect opponent? Or just a guy you don’t like to play against? Paul Scholes,” he said last year on CBS Sports’ In The Mixer.

“For the direct opponent, I would go back in the days – Taribo West. Because [at Auxerre], they did man-marking. He followed you everywhere, even in the dressing room.”

After Henry left Barcelona – perhaps not coincidentally – Ramos went on to establish himself as one of the finest centre-backs of his generation, playing a key role in Real Madrid winning the Champions League four times in five years from 2014 to 2018.

But we can’t help sit back and basque in the glory of Henry making such a great player look absolutely hapless in this compilation that shows the legendary forward at his most audacious, stylish and beguiling. What a bloody player.