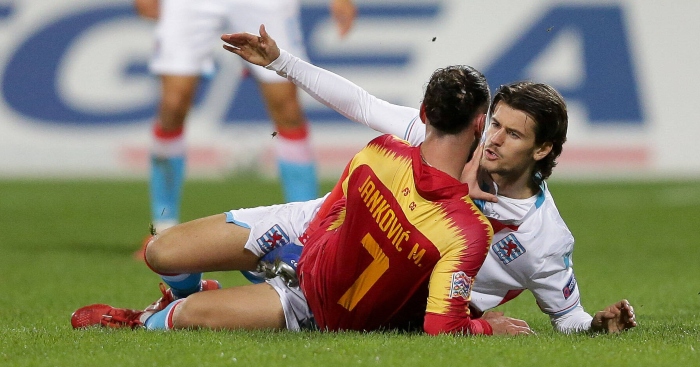 Let’s be straight here – these are scenes we definitely want to see.

Towards the end of the Nations League match between Montenegro and Luxembourg, any watching neutrals were rewarded for their decision to watch the game by witnessing a rare and delightful beast: three red cards in one incident.

Admittedly, the behaviour of the players was more Mean Girls than the Battle of Santiago. Alternatively, the petty nature of events made the moment even more glorious.

Montenegro’s Marko Jankovic and Olivier Thill of Luxembourg were scrapping for the ball in the middle of the pitch; Jankovic having already evaded one wild tackle.

Thill comes charging in with all the self-control of a runaway elephant. Both players somehow end up bundled together on the floor, vehemently protesting for a foul against each other.

Amusingly, Jankovic and Thill roll away holding their faces in anguish. As all sane individuals would, players from both teams took this as their cue to start a mass pushing match – the kind you’d witness after closing time on a Saturday night over a minor infringement.

Replays showed that Jankovic and Thill attempted to slap each other and overreact in an attempt to ensure a red card. It is very probable that both players would have been better served attending drama school than any football academy.

Possibly suppressing a chuckle, referee Sascha Stegemann sent off both men. Having been caught up in the excitement of the post-slap brawl, defender Marko Simic was awarded a second yellow card and dismissed also.

Luxembourg held on for a 2-1 victory, cementing their reputation as the most improved national team in Europe. On the other hand, the fact Montenegro held England to two draws in EURO 2012 qualification looks increasingly like a misprint.

In the meantime, we should all celebrate both team’s commitment to BTEC shithousery.