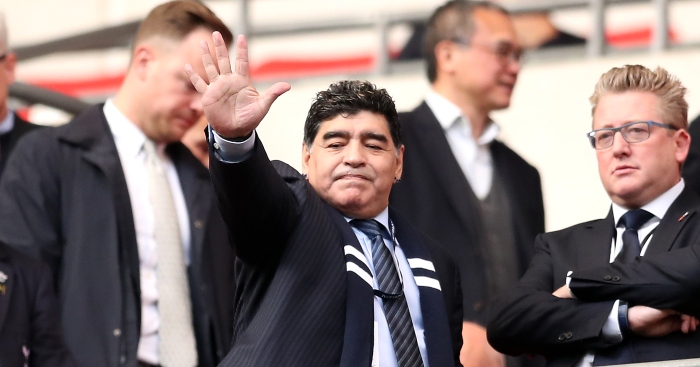 As well as being one of the greatest players of all time, Diego Maradona also inspired some of football’s biggest superstars in the next generation.

Maradona, who once played for Tottenham in Ossie Ardiles’ testimonial, was a guest at Wembley in 2017 before Spurs’ game against Liverpool.

After being invited to watch the game by old team-mate and compatriot Mauricio Pochettino, he was then introduced to Harry Kane and Hugo Lloris in the changing room.

The World Cup winner expressed his admiration for Kane and even offered the striker some advice on how to improve his goalscoring.

The advice ultimately paid dividends as Spurs went on to beat Jurgen Klopp’s side 4-1, with Kane scoring a brace.

“We met him before the game. He’s a fantastic guy. Great energy. Great guy. He is one of the best No 10s ever. It was great for him to be here today,” Kane said after the game.

“He didn’t talk much English. He talked in Spanish. I didn’t understand what he was saying. But he was very energetic. He said some nice compliments, not just to me, but to the team and the manager. I think they played together early in the gaffer’s career.

“Just to be in the company of someone like that – what a player he was. He was chatting, laughing, joking – everyone would probably be in awe of him. He’s still argued to be best of all time. To watch us play well was important.”