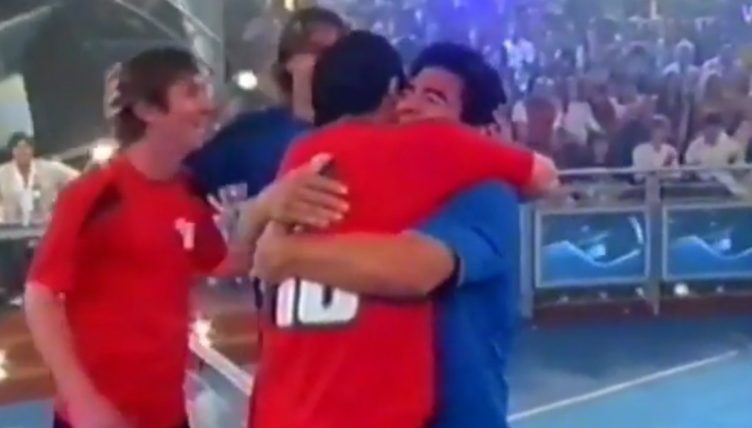 An old video from 2005 has recently been unearthed of Argentinian footballing royalty – Diego Maradona, Hernan Crespo, Carlos Tevez and Lionel Messi – taking part in a game of football tennis.

El Diego wasn’t famed for keeping on top of his fitness following his retirement, but he looks pretty sprightly here, playing alongside a 30-year-old Crespo.

Up-and-comers Tevez and Messi were tasked with taking on the more experienced duo. Tevez was at Corinthians at the time, having long since broken through at boyhood club Boca Juniors, and yet to make his controversial move to West Ham United.

Messi, meanwhile, was starting to garner a reputation as one to watch. He’d made his debut, aged 17, a few months prior for Barcelona and was absolutely tearing it up alongside best mate Sergio Aguero for Argentina’s Under-20s.

Even in a fun game in a television studio, you can see Maradona – who would later take charge of La Albiceleste at the 2010 World Cup, with Messi and Tevez two of the key men in his squad – didn’t lose his competitive edge. It was his final touch that won the game for the old-timers.

Crespo: ‘Making history’ by combining the best of Argentina & Brazil as boss